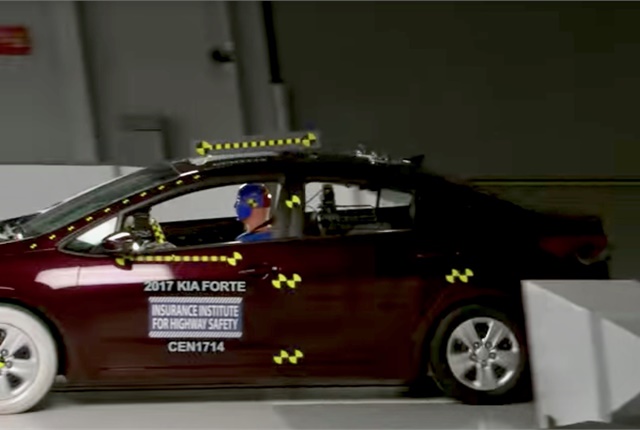 The Forte qualifies for the leading IIHS honor when the compact car is equipped with an optional front crash prevention system.

The 2017 Kia Forte has longer side-curtain air bags than earlier models. In addition, Forte cars built after March feature a strengthened structure at the door hinge pillar and the doorsill.

Thanks to these changes, Fortes built after March earned the highest rating of “good” in the small overlap test, IIHS said. This test represents a crash in which the left front corner of a vehicle collides with another vehicle or with an object such as a tree or utility pole.

In the test of the Forte, the driver’s space was maintained well, with maximum intrusion of 3 inches at the footrest, according to IIHS. The dummy’s movement was well controlled, and measures from the dummy indicated a low risk of injuries in a crash of this severity. Earlier models drew a rating of “marginal,” taking into account intrusion reaching 8 inches at the lower hinge pillar. In addition, the dummy’s head contacted the instrument panel, and the side curtain air bag failed to provide enough forward coverage, IIHS said.

To qualify for the 2017 Top Safety Pick award, a vehicle must garner the highest rating of “good” in the small overlap front, moderate overlap front, side, roof strength and head restraint tests and must have an available front crash prevention system that earns an “advanced” or “superior” rating. The “plus” is awarded to vehicles that meet those criteria and also have headlights that draw a “good” or an “acceptable” rating.

(To view video footage of the small overlap front test, click on the photo or link below the headline.)