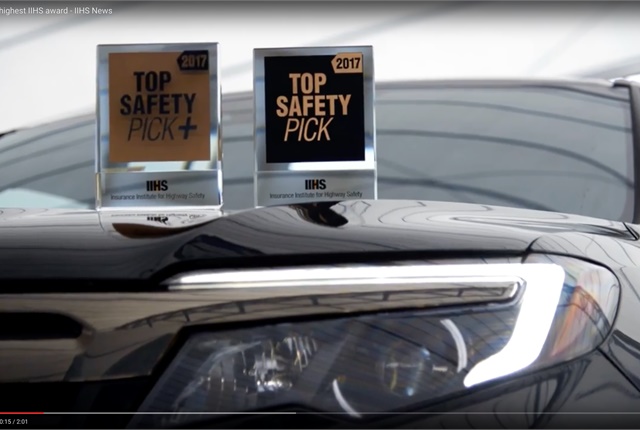 IIHS toughened the criteria for Top Safety Pick+ to reflect new headlight evaluations launched in 2016. The recognition program is meant to encourage manufacturers to offer advanced protection for vehicle occupants in crashes, along with features that help drivers avoid crashes in the first place.

“The field of contenders is smaller this year because so few vehicles have headlights that do their job well, but it’s not as small as we expected when we decided to raise the bar for the awards,” said Adrian Lund, IIHS president. “Manufacturers are focusing on improving this basic safety equipment, and we’re confident that the winners’ list will grow as the year progresses.”

For both Top Safety Pick+ and Top Safety Pick awards, models must earn the highest score of “good” in the small overlap front, moderate overlap front, side, roof strength and head restraint tests, as well as an “advanced” or “superior” rating for front crash prevention with standard or optional autobrake. Headlights are factored in only for the top award.

IIHS launched headlight ratings in the spring after lab tests revealed that government standards allow for huge variation in the amount of illumination headlights provide in on-road driving. Nighttime visibility is critical to highway safety because about half of traffic deaths occur either in the dark or at dawn or dusk, IIHS said.

In the IIHS evaluations, engineers measure how far light is projected from a vehicle’s low beams and high beams, as the vehicle travels straight and on curves. Also measured is glare from low beams for oncoming drivers. Vehicles equipped with high-beam assist, which automatically switches between high beams and low beams depending on the presence of other vehicles, can get extra credit.

IIHS noted that its evaluations demonstrate that a vehicle’s price tag doesn’t correspond to the quality of headlights. More modern lighting types, including high-intensity discharge (HID) and LED lamps along with curve-adaptive systems, also are no guarantee of top performance.

To qualify for 2017 Top Safety Pick+, a vehicle must earn “good” ratings in the five crashworthiness tests, an “advanced” or “superior” rating for front crash prevention, and a “good” or “acceptable” headlight rating. Here are the winners:

To qualify for 2017 Top Safety Pick, a vehicle must earn “good” ratings in the five crashworthiness tests, as well as an “advanced” or “superior” rating for front crash prevention. Here are those winners:

Of the 38 Top Safety Pick+ winners, only seven are available with headlights that earned a top rating of “good.” Performance can vary by vehicle trim level, so vehicle buyers need to ask for the highest-rated headlights, IIHS recommended. Twenty-one award-winning models come with a standard autobrake system.