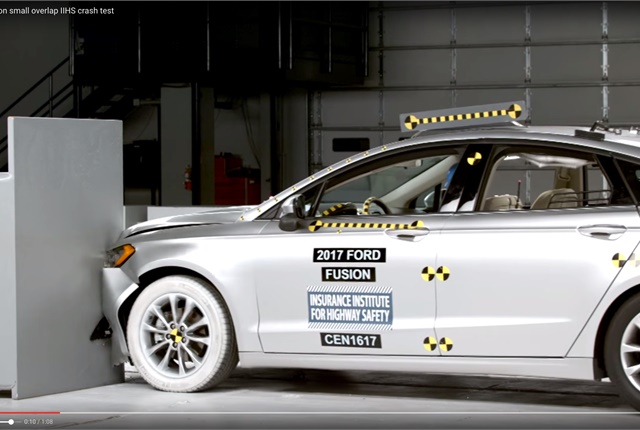 A modified front-end structure and a new optional automatic braking system helped the 2017 model-year Ford Fusion qualify for a Top Safety Pick+ award from the Insurance Institute for Highway Safety.

The beefed-up front end improved the Fusion’s performance in the small overlap front test, IIHS said, raising the model’s rating from “acceptable” to “good.” (To view video footage of this test, click on the photo or link below the headline.)

“Before the changes, the Fusion had maximum intrusion of 6 inches in the test, and the dummy’s head barely contacted the front airbag before sliding off,” IIHS said in a released statement. “In contrast, maximum intrusion in the 2017 model was less than 2 inches, and the airbags and safety belt worked well together to control the dummy’s movement.”

To qualify for Top Safety Pick+, a vehicle must earn a rating of “good” in all five crashworthiness tests and have an available front crash prevention system that earns an “advanced” or “superior” rating.