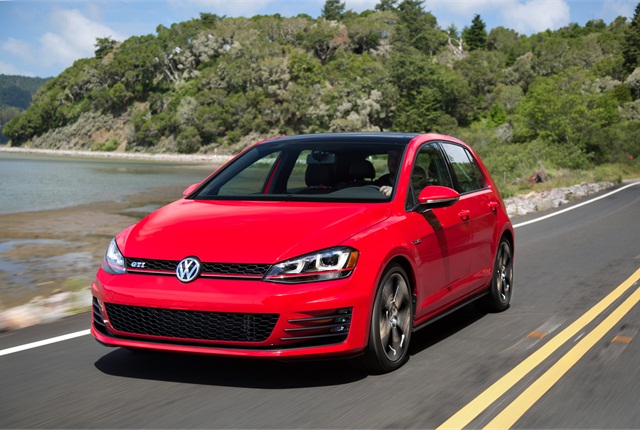 The 2015 model-year Volkswagen Golf and its twin, the Volkswagen GTI, have earned the Top Safety Pick+ award from the Insurance Institute for Highway Safety, after scoring “good” in each of the crash tests, IIHS said.

IIHS said it also took into account the cars’ available front crash prevention. Redesigned for 2015, the Golf and GTI offer an optional forward collision warning system that drew an IIHS rating of “basic.”

“In the small overlap test, the driver's space was maintained well and injury measures recorded on the dummy indicate a low risk of any significant injuries in a crash of this severity,” IIHS noted. “While the dummy's head nearly slid off the left side of the airbag, the side curtain airbag deployed to protect the head from contacting side structure and outside objects.”

In 2012, IIHS introduced the small overlap test, which is more challenging than either NHTSA’s head-on crashes or the IIHS moderate overlap test. In the test, 25 percent of a vehicle's front end on the driver's side strikes a rigid barrier at 40 mph. The crash replicates what happens when the front corner of a vehicle collides with another vehicle or with an object such as a tree or utility pole.

The Golf and GTI are the latest Volkswagen models to earn a 2014 safety award from IIHS after the Passat qualified for Top Safety Pick. To qualify for Top Safety Pick, a vehicle must earn a “good” or “acceptable” rating for small overlap protection and a “good” rating in the other four tests. The "plus" is awarded to vehicles that meet those criteria and also earn a rating of “basic” or higher for front crash prevention.

To view IIHS crash test video footage of the Volkswagen GTI, click on the photo or link above.