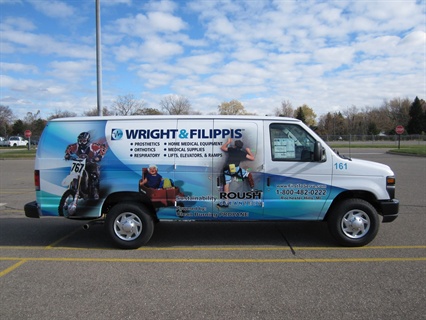 ROCHESTER HILLS, MI – Medical equipment and services provider Wright & Filippis recently replaced seven of its vehicles with propane-fueled versions and plans to convert five more before the end of the year, with potentially more conversions on the way.

Out of a fleet of 177, 77 are used for delivery and customer service to end users; the rest are used for sales. Automotive Fleet spoke with Tom Hopkins, department head for the company’s Central Warehouse & Logistics division, about the company’s experience with the converted vehicles so far and other ways it works to contain fleet-related costs.

Currently, the company’s seven propane-fueled vehicles are headquartered at its Rochester Hills Central Distribution facility. Three of the vehicles are 2011-MY Ford E-350 cargo vans, and four are E-350 dual rear-wheel cutaway vans. Hopkins said Wright & Filippis ordered the vehicles from a local dealer after the company’s fleet cycle planning meeting in July, 2010. Part of the reason for this decision has to do with propane fuel prices in Rochester Hills, where propane costs around $2.15 per gallon, according to Hopkins.

“In the first quarter of this year we saw an overall savings of just over $3,000 in fuel cost for the first three vehicles that we deployed,” Hopkins said. “Although all three vehicles were not in service for the entire quarter the data we have tells us this is about 32 percent savings for the like gas vehicles over the previous year.” 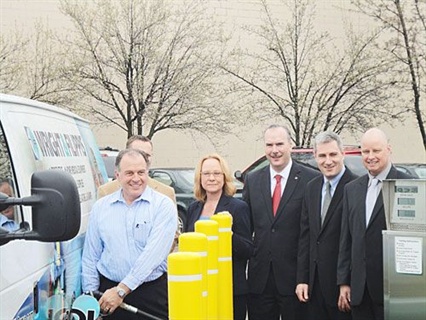 Based on the savings Hopkins said the company has seen so far, more propane-fueled vehicles are on the horizon.

“At a minimum we have plans to convert five more vehicles to the propane platform before the end of this year,” Hopkins said. “Although we do not have a handle on a number just yet, we are already beginning to discuss a strategy for 2012 and beyond.”

To help fund these vehicle purchases and infrastructure, to achieve a faster return on investment, the company used grant funding through the DOE’s Clean Cities program and the Detroit area Clean Energy Coalition. Hopkins said the grants covered the cost of the conversion systems and infrastructure completely.

“That gives us an immediate return on the investment, as the vehicles were purchased in the context of our existing budget,” Hopkins said. “We are expecting to see in the neighborhood of $30,000 and $40,000 in savings in year one as we continue to deploy these vehicles. If tax incentives hold beyond 2011, we could see upwards of $50,000 in saving in 2012 with all 12 of our propane autogas vehicles deployed. Who knows? We may have more than 12 by the time 2012 rolls around.”

When converting vehicles, Hopkins said the company believed it was necessary to fully involve the on-site technician who maintains the fleet. Hopkins said he participated in the selection process for the propane-fueling system and encouraged his feedback.

“To take that a step further, when we settled on the ROUSH CleanTech product, ROUSH allowed him to come down and witness/participate in the installation process so he would have a really good understanding of the system,” Hopkins said. “It gave him a very valuable perspective on the entire system as he will ultimately be the first touch on these first several vehicles that we deploy.”

In addition to purchasing propane-fueled vehicles, Hopkins said the company made a number of changes designed to improve vehicle routing. He said a combination of new technology and scheduling changes led to major savings.

“In 2008 we completely overhauled our distribution model,” he said. “We changed our scheduling model on the Home Medical Equipment side of our business. We reduced the schedule in which we would deliver to our internal locations. We replaced an obsolete GPS tracking system with an automated routing and tracking technology and centralized our routing. All of these initiatives allowed us to “right-size” our staff and fleet. The net results showed a 20-percent reduction in delivery routes, a 15-percent increase in productivity, a 32-percent reduction in miles driven, and a 27-percent reduction in fuel consumption. These are sustained numbers, and we are still seeing incremental benefits quarter to quarter.”

Wright & Filippis has made other efforts to improve the company’s overall sustainability, although there is no specific plan in place.

“We have an extensive recycling program in place for our paper, cardboard and plastics,” Hopkins said. “We have transitioned to motion sensor lighting in all of our facilities to drive waste out of our energy consumption, and we have installed thermostat monitoring systems that allow us to control the temperature at the facility level remotely and centrally. So no plan, but a lot of effort in several key areas beyond the fleet.”