Cars that run 100,000 miles without a ma­jor repair, are powered by several revolu­tionary types of automotive propulsion-from jet to chemical-and never need an oil change or grease job.

Sound impossible? Twenty years ago it would have. Today, such cars are a near reality as the result of major engineering breakthroughs which are transforming the shape and motion of the modern auto.

In fact, there are such cars on the road. Un­fortunately, they'll never be offered to the fleet operator. The cars, of course, are the auto industry's dream of experimental or idea cars.

These dream cars, costing millions of dol­lars, will never go into production. Yet, they provide the auto industry with an invaluable laboratory on wheels. Crammed into their inner workings are just about every automotive en­gineering advance now known.

The dream cars someday will provide the fleet operator with such things as gas turbine or fuel cell engines, new body styling tech­niques and even possibily an electronic audio warning signal to alert the driver when tire pressure is low, a door unlatched, a car fol­lowing too closely and when there is a danger of engine trouble.

If this sounds far fetched, remember that the dream cars of a decade ago contained such now commonplace equipment as power brakes, power steering and tubeless tires.

One of the most exciting developments in the industry today is the gas turbine engine.

While all automakers are working on the promising power plant, Chrysler Corp. appears to be the leading exponent of automotive gas turbines. The company, which recently com­pleted a 3,100-mile cross country test of a gas turbine powered Dodge Dart, announced that it will build 50 to 75 turbine powered cars within the next 18 to 24 months for sale to "selected customers." Since the cars will pri­marily be test vehicles, they probably will go to fleet users in order to be put through a thorough workout.

First, it is a lot simpler. There is only one moving part to every five in a conventional power plant. It requires no distributor or break­er points, only one spark plug, no anti-freeze and no oil change.

Second, there is no vibration in a turbine engine. Explosions are taking place constantly while a piston engine runs. Combustion is con­stant in a gas turbine. Also, there is no start­ing problem or warm-up problem, even in cold­est weather.

Third, a gas turbine engine will run on al­most any fuel. Chrysler says its engine will operate equally well on diesel fuel, peanut oil, gasoline, kerosene, alcohol, furnace oil, French perfume or virtually any liquid that will run through a pipe and will burn with oil. While most fleet operators won't be using Napoleon brandy to power their cars, the versatility of the turbine offers many advantages. 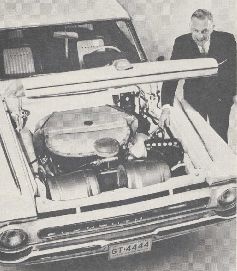 One of the problems in the development of a turbine engine is that air and fuel are mixed and burned under pressure from gases which forced a turbine wheel to spin at terrific speed, something like an old windmill. In early tur­bines the exhaust was so hot it was feared expelled heat would melt pavements or en­danger pedestrians. Chrysler says this prob­lem has been solved by recirculating the ex­haust.

Another problem with early turbines was that such high temperatures were developed that scarce, critical and expensive metals were needed. Chrysler says it has found a new read­ily available alloy which solves this problem for mass production.

George J. Heubner, Jr., executive vice presi­dent for research at Chrysler Corp., believes that mass production of a turbine engine could be achieved within five years. Prices would be comparable to internal combustion engines if mass production is reached.

Ford Motor Co. and General Motors Corp. are working on the development of a gas tur­bine engine, but they have made no public pronouncements in recent months. The Fire­bird III, a GM experimental car, has had a gas turbine engine under its hood for the past several years.

Even if the gas turbine engine proves unfit for general use, the auto industry's research and development will have been worthwhile.

One of the major developments of turbine research is fuel injection systems, which have been used on modern passenger cars and may be used again when they are further developed. Ram manifold used by Chrysler Corp. to in­crease engine efficiency is another result of re­search on the gas turbine engine.

Improved automotive ventilating systems and supercharging systems were developed for cars with piston-type engines during research on the gas turbine.

Another development that may be an out­growth of the turbine is thermoelectric or mag­neto hydrodynamic powerplants on cars. These engines of course, must wait the development of a successful turbine power plant.

Still another power plant possibility is a pis­ton engine that will burn kerosene, furnace oil or almost any fuel under a newly developed principle developed by Texaco Inc.

Ford has a production agreement with Texaco, which has developed such a multi-fuel engine and has been testing it for the past 10 years. Texaco engineers say the engine is ready for production and claim it will run a standard six cylinder car more than 40 miles on a gallon of kerosene or furnace fuel.

Under the Texaco principle, low grade fuel is shot directly at the spark plug in a swirling manner. This high concentration of the fuel around the ignition plug causes it to burn more completely than the high octane gasoline used in today's engines.

The result is high fuel economy, very little exhaust fume plus the advantage of being able to use almost any fuel and change from one fuel to another.

Engines aren't the only automotive compon­ents coming in for attention in the million dollar experimental cars.

Startling innovations in the car of the future may include space-frame body construction us­ing a lattice of lightweight structural members placed where the loads require them and cover­ed by stressed panels. Plastics and other light­weight metals would be incorporated into body design. Transparent steel, already in the de­velopment stage, could replace glass in roofs. And color-filled metal used in the body would eliminate sprayed-on surface paint.

If this isn't enough, Andrew A. Kucher, Ford vice president of research and engineering for-sees anticipatory auto-control mechanisms to supplement slow human reactions behind the wheel.

One of the most interesting prospects, ac­cording to Kucher, is vehicle specialization.

"Distinct types of autos should be available for diverse purposes ranging from turnpike driving to localized commuting, each with its own advantages of performance, interior space, comfort and ease of handling," Kucher said.

One of latest idea cars is the Dodge Flitewing.

Built at a cost of $125,000 and resembling a present-day production model in both styling and interior features, the Flitewing has "flip-up" windows in place of conventional roll-down windows. When the door is opened, a window-roof canopy automatically cantilevers upward. When the door is closed, the canopy descends and fastens firmly in place.

A new speedometer, which utilizes a series of 13 elliptical windows to indicate speed at a glance in 10-mile-per-hour increments, re­places the traditional speed gauge. Dashboard knobs and dials are replaced with pushbuttons. Radio and heater controls are located in a full-length console. Other non-driving controls such as the light switches and turn indicators are located on the driver's door panel.

All of the experimental or dream cars have one thing in common. They are designed to increase driving pleasure and cut down the amount of maintenance problems. This is good news for fleet users.