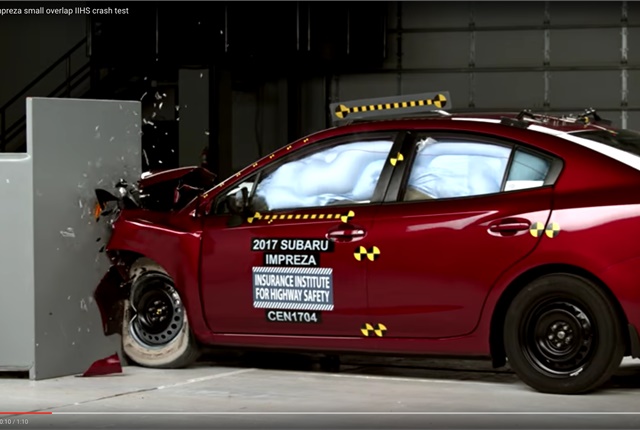 The redesigned Subaru Impreza compact car is the latest winner of the Insurance Institute for Highway Safety’s 2017 Top Safety Pick+ award, thanks to top IIHS scores for crash protection, a “superior”-rated front crash prevention system, and headlights that drew a rating of “good.”

The Top Safety Pick award is given to vehicles that earn the best possible rating of “good” in the institute’s five crashworthiness tests — small overlap front, moderate overlap front, side, roof strength and head restraints — and also have an available front crash prevention system that earns an “advanced” or “superior” rating. The plus is added for winners that also have headlights that merit a rating of “acceptable” or “good.”

(To view video footage of the car's small overlap front crash test, click on the photo or link below the headline.)

Both the sedan and wagon version of the 2017 Impreza earned the award. The Impreza's optional EyeSight system drew a “superior” rating for front crash prevention. In IIHS track tests at 12 mph and 25 mph, the Impreza avoided a collision, IIHS said. The system also has a forward collision-warning component that meets National Highway Traffic Safety Administration criteria.

The Impreza has several available headlight systems. When equipped with LED headlights and high-beam assist, which automatically switches between high beams and low beams depending on the presence of other vehicles, the car earned a “good” headlight rating. Without high-beam assist, the LED headlights drew an “acceptable” rating. The halogen lights that come on lower trim levels attracted a “marginal” rating.

The Impreza also earned the top rating of “good+” for ease of use of LATCH hardware for installing child restraints. This makes it the only small car to earn top ratings in all IIHS evaluations, the institute said.