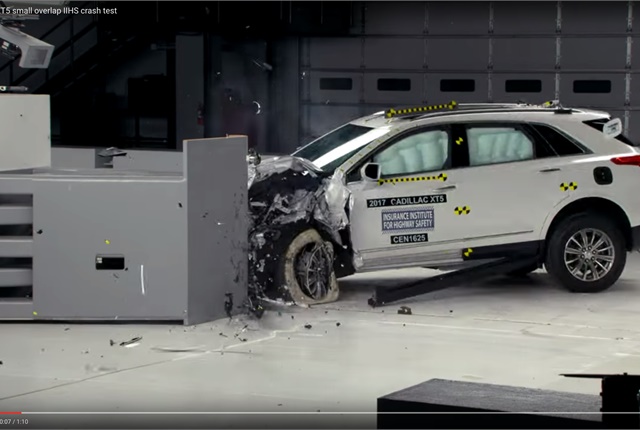 The XT5 earned the highest possible rating of “good” in all five of the institute’s crashworthiness evaluations, IIHS said in a released statement. (To view video footage of the small overlap crash test, click on the photo or link below the headline.)

When equipped with optional front crash prevention, the vehicle drew a “superior” or “advanced” rating, depending on the package selected.

When equipped with low-speed autobrake only, the XT5 drew an “advanced” rating. The SUV avoided a collision in the 12 mph test. In the 25 mph test, the impact speed was cut by 9 mph.

To qualify for a 2016 Top Safety Pick+ award, a vehicle must earn “good” ratings in the small overlap front, moderate overlap front, side, roof strength, and head restraint tests. The vehicle also must have an available front crash prevention system that earns an “advanced” or “superior” rating.