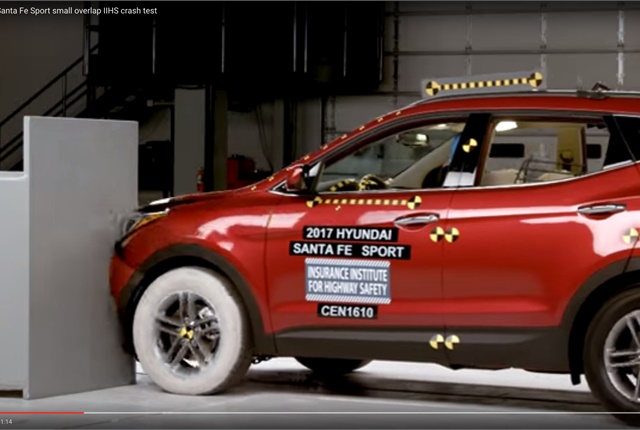 Thanks to a beefed-up occupant compartment, the Hyundai Santa Fe Sport recently improved its performance in the Insurance Institute for Highway Safety’s small overlap front crash test — upgrading its score from “marginal” to “good.” (To view video footage of the test, click on the photo or link below the headline.)

The mid-size SUV also earned “good” ratings in the moderate overlap front, side, roof strength and head restraint tests to qualify for the IIHS’s top honor.

Prior to the occupant compartment changes, the Santa Fe Sport’s structure failed to hold up in the small overlap test, IIHS said. This test replicates what happens when the front corner of a vehicle collides with another vehicle or an object such as a tree or utility pole. Intrusion measured as much as 10 inches at the lower door hinge pillar. The dummy’s head barely contacted the front air bag before sliding off, as the steering column was pushed to the right.

“In contrast, the 2017 model’s driver space was maintained well, with maximum intrusion of 3 inches at the footrest,” IIHS said in a released statement. “The dummy’s movement was well-controlled, and the head stayed on the front airbag until rebound.”