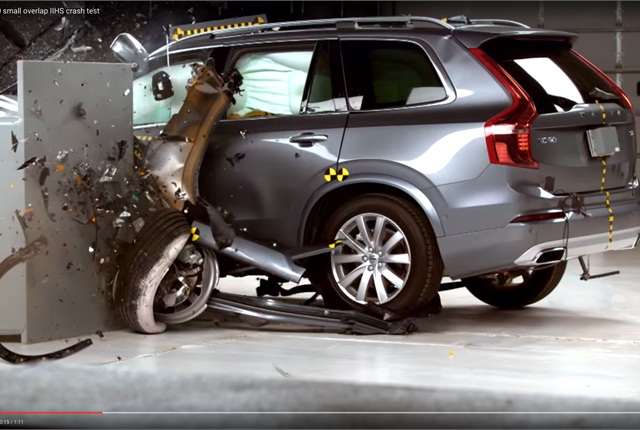 The 2016 model-year Volvo XC90 has drawn the highest safety rating – Top Safety Pick+ – from the Insurance Institute for Highway Safety.

In announcing the safety score for the midsize luxury SUV, IIHS cited “stellar ratings for crash protection and for its standard front crash prevention system.”

The 2016 XC90 comes with an upgraded version of Volvo’s City Safety feature. A previous version of City Safety – standard on earlier Volvos, though not the XC90 – was an automatic braking system that functioned only at low speeds. The new version, however, also functions at higher speeds.

In IIHS track tests at 12 mph and 25 mph, the XC90 avoided collisions, IIHS said. The system also includes a forward collision warning component that meets criteria set by the National Highway Traffic Safety Administration. The vehicle earned the maximum 6 points from IIHS for a front crash prevention rating of “superior.”

The SUV earned “good” ratings in all five of the institute’s crashworthiness tests — small overlap front, moderate overlap front, side, roof strength and head restraints. “Good” is the highest possible score in those categories.

In the small overlap test, the most challenging of the IIHS evaluations, “the driver space held up very well, with intrusion of less than 2 inches at all measured points in the driver’s seating space,” IIHS said. “The dummy’s movement was well-controlled, and the front and side curtain airbags worked well together to protect the head. Measures taken from the dummy showed a low risk of any significant injuries in a crash of this severity.”

To qualify for Top Safety Pick, vehicles must earn “good” ratings in the moderate overlap front, side, roof strength and head restraint tests, plus a “good” or “acceptable” rating in the small overlap test. For Top Safety Pick+, vehicles also need an available front crash system with an “advanced” or “superior” rating.

To view crash test video footage, click on the photo or link below the headline.