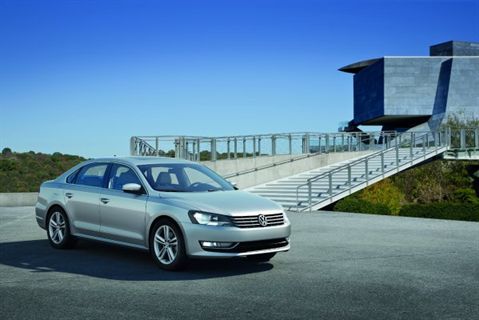 Wolfsburg / Herndon / Detroit  - Volkswagen of America, Inc., announced the debut of its new Passat TDI, in addition to two other sedan models, for the U.S. marketplace. The company said it developed a new, larger body style for all three models in addition to a range of powertrain choices. VW stated that it plans to announce final pricing in the spring but that it will start at around $20,000.

VW said its Passat provides three powertrain options: a 2.5L gasoline engine, a 2.0L TDI Clean Diesel engine and a 3.6L VR6. The 2.5L five cylinder engine (170 hp/177 lb.-ft.), which VW said the company is offering in the Passat for the first time, will work with a standard 5-speed manual transmission. As an alternative, a buyer can choose a model that pairs the 2.5 multi-port injection engine with a 6-speed automatic transmission.

For the four-cylinder 2.0L TDI Clean Diesel (140 hp/236 lb.-ft.), VW said the engine gets 43 miles per gallon on the highway, with a range of approximately 800 miles. The TDI Clean Diesel engine comes equipped with a NOx storage catalytic converter to reduce emissions (the engine meets emissions requirements in all 50 states). Optional on the Passat TDI is Volkswagen’s 6-speed DSG transmission.

The 3.6 liter VR6 (280 hp/258 lb.-ft.) gets 28 mpg and uses a 6-speed automatic dual-clutch system that instantly engages and disengages gears without the need for a clutch pedal.

VW said the Passat will come in three trim levels, S SE and SEL, with a total of 16 equipment levels. When it comes to safety features, the Passat offers VW’s Intelligent Crash Response Systems, which are designed to initiate automatic safety measures in a collision, for example shutting off the fuel supply and high-consumption electronic equipment, unlocking the doors, disconnecting the battery terminal from the alternator cable and switching on the hazard light. Other safety features include a tire-pressure monitoring system, the ESP electronic stabilization program, ABS with braking assistant, Hill Climb Assist (with the manual transmission, six airbags and a rigid body structure for additional protection.

The new, larger Passat is 191.7 inches long and has a 110.4 inch wheelbase, which translates into an increase in rear seating space. The automaker said the instrument panel is similar to that of Volkswagen’s new Touareg.

All three models of the Passat offer the following features as standard, according to Volkswagen: