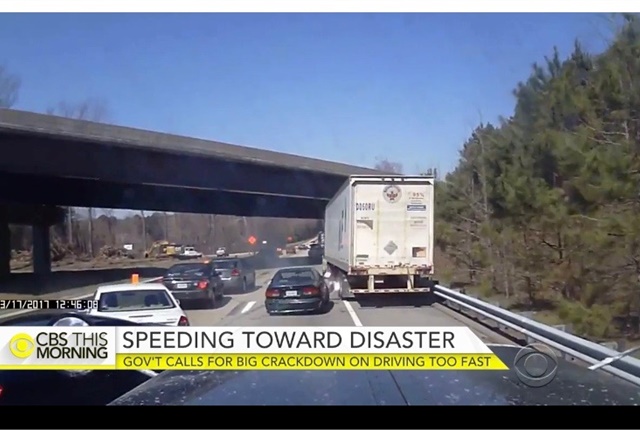 Pointing to speeding as a major factor in about one-third of road deaths, the National Transportation Safety Board (NTSB) is recommending expansion of the use of speed cameras and more stringent speed-limit enforcement by police.

The recommendations are included in a newly released preliminary report on the findings of an NTSB study focused on reducing speeding-related passenger vehicle crashes. According to the report, speeding continues to be commonplace on American roadways, even though it’s almost as risky as drunken driving. Compared to alcohol-impaired driving, speeding is considered more socially acceptable — despite its heavy toll in loss of life and serious injuries.

“You can’t tackle our rising epidemic of roadway deaths without tackling speeding,” said NTSB Acting Chairman Robert L. Sumwait. “And you can’t tackle speeding without the most current research. Speed kills. This study examines how it kills and what actions can be taken to save lives and prevent speeding-related crashes.”

The NTSB report recognizes automated speed enforcement as an effective countermeasure to reduce speeding-related crashes, fatalities and injuries. But only 14 states and the District of Columbia use these cameras for speed-limit enforcement.

From 2005 through 2014, speeding-related crashes involving passenger vehicles resulted in 112,580 fatalities, according to law enforcement data cited in the study. This figure represents 31% of all traffic fatalities during that period. In 2014, passenger vehicles accounted for 77% of speeding vehicles involved in fatal crashes, the report states.

The report acknowledges that the relationship between speed and crash involvement is complex and affected by a number of factors. But speed — and therefore speeding — “increases crash risk both in terms of the likelihood of being involved in a crash and in terms of the severity of injuries sustained by those involved in speeding-related crashes,” the NTSB noted in a released statement about the research.

The report also criticizes how some states have raised certain highway speed limits to bring them in line with the 85th percentile speed that’s observed in free-flowing traffic. There are more reliable methods for setting speed limits, the NTSB said, and they take into account such factors as crash history and the presence of vulnerable road users including pedestrians.

Additionally, the report underscores the need for law enforcement agencies to become more consistent in how they enforce speed limits and report speeding-related crashes. The lack of consistency has led to underreporting, which ultimately hinders local efforts to implement speed enforcement programs that are based on solid data, according to the NTSB.

In fact, a number of evolving safety technologies hold promise in the quest to prevent speeding, researchers concluded. These technologies include intelligent speed adaptation (ISA), which uses an onboard global positioning system or road sign-detecting camera to determine the speed limit. The system then either electronically limits the speed of the vehicle or warns the driver if the speed is exceeded.

“New car safety rating systems are one effective way to incentivize the manufacture and purchase of passenger vehicles with advanced safety systems such as ISA,” the report states.

Another key to the prevention of speeding is raising public awareness of the safety risks involved, the study asserts, and changing how the public views the crime. In response to the report, the National Safety Council issued a statement reinforcing this notion, urging federal, state and local leaders to embrace the report's proposed solutions.

"If we work together, our cultural novocaine will start to wear off and we will see speeding for what it is — a deadly habit," said Deborah A.P. Hersman, president and CEO of the National Safety Council. "More often than not, driving faster will not hasten our arrival; instead it may accelerate a disaster."

“This NTSB action should spur responses at the national, state and local levels to prioritize addressing excessive vehicle speeds along with other pressing traffic safety problems,” said Jonathan Adkins, executive director of the Governors Highway Safety Association. “National leaders must come together to develop best practices and programs to deter drivers from speeding and prevent the crashes, injuries and fatalities that too often result. We know from experience that sustained, high visibility enforcement efforts — including automated speed enforcement — coupled with strong public awareness campaigns can truly make a difference.”

Click here to download the preliminary report on the research. The full report, titled “Reducing Speeding-Related Crashes Involving Passenger Vehicles,” will be available on the NTSB website in a few weeks.