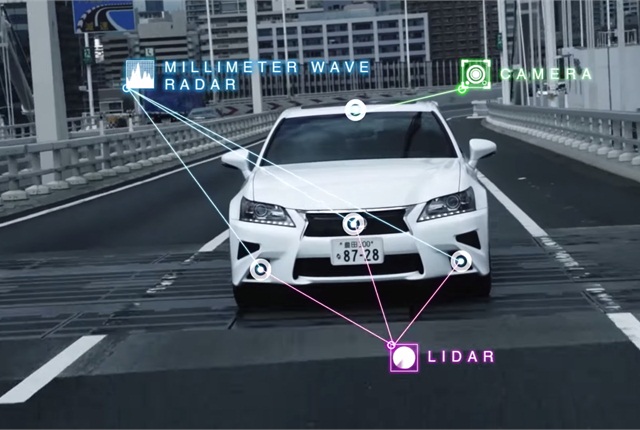 Toyota has been testing a new self-driving vehicle, called Highway Teammate, with the aim of launching related products by around 2020, the automaker said.

Highway Teammate, a modified Lexus GS, has driven on Tokyo's Shuto Expressway during a series of maneuvering trials, the company said. The vehicle uses on-board technology to evaluate traffic conditions, make decisions and take action during highway driving. This includes merging onto or exiting highways, staying in or changing lanes, and maintaining inter-vehicle distances. (To view a Toyota video highlighting the vehicle's capabilities, click on the photo or link below the headline.)

“In addition to demonstrating the capabilities of next-generation safety technologies, the vehicle represents Toyota’s view of the evolving driver-car relationship in the age of artificial intelligence,” the company said in a press release. “Toyota believes that interactions between drivers and cars should mirror those between close friends who share a common purpose, sometimes watching over each other and sometimes helping each other out.”

This approach, Toyota said, is the company's “Mobility Teammate Concept.”

To engage Highway Teammate's automated operation, the driver switches to automated driving after passing through a toll gate and entering a highway on-ramp. Highway Teammate can pinpoint its position using road map data. The car also uses multiple external sensors to recognize nearby vehicles and hazards, and selects appropriate routes and lanes depending on the destination, Toyota said.

Based on these data inputs, Highway Teammate then automatically operates the steering wheel, accelerator and brakes to maintain the appropriate speed and driving lines in much the same way as a human driver would.

“By successfully combining recognition and decision-making processes with the ability to take action, Highway Teammate embodies the kind of safety technology that is expected to play a key role in future products.” Toyota said.

Toyota has been researching and developing automated driving technologies since the 1990s.

Toyota has identified three types of intelligence that are crucial to the success of its Mobility Teammate Concept:

“Toyota will enhance its development of these automated driving technologies with the aim of achieving a society where mobility means safety, efficiency and freedom,” the company said.