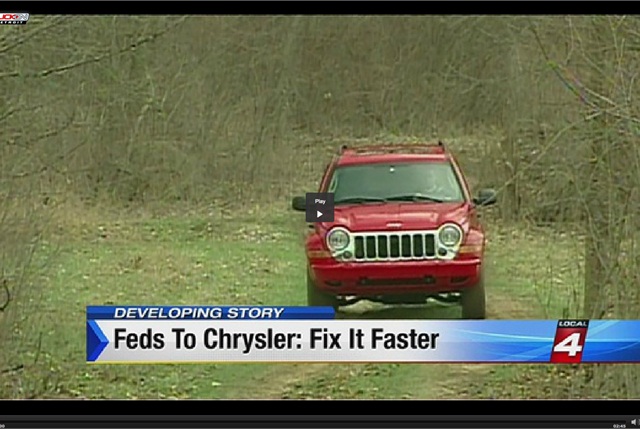 The U.S. Department of Transportation, citing the slow pace of a Jeep safety recall originally announced last year, has ordered Chrysler Group to provide details about its recall plans by a July 16 deadline.

Transportation Secretary Anthony Foxx issued the special order, which concerns the recall of approximately 1.56 million 2002-2007 model-year Jeep Liberty and 1993-1998 MY Jeep Grand Cherokee SUVs. In June 2013, Chrysler Group agreed to recall the vehicles and install trailer hitches to strengthen the rear structure. The goal is to mitigate the risk of fuel leaks in low-speed collisions.

Such fuel leaks pose a fire risk, said the National Highway Traffic Safety Administration. NHTSA is an agency within the DOT.

In the special order, the DOT criticizes Chrysler’s timeline to complete production of the required hitches. “Assuming that all of these owners will respond to the notification, it will take Chrysler at least 4.7 years and 2.06 years respectively to produce the required number of Grand Cherokee and Liberty hitches at the current rate of production,” the DOT states in the order.

The order calls for Chrysler to provide specific recall details, accompanied by an affidavit, to NHTSA by the July 16 deadline. The requested information includes the number of active vehicles that would be covered by the recall, the number of notification letters that Chrysler will mail out (sorted by model and model year), Chrysler’s expected recall remedy completion rate and associated financial projections, and an explanation of why the automaker isn’t relying on additional suppliers to produce the hitches.

In response to the DOT order, Chrysler Group posted a statement on its website defending its actions. “Launching a safety recall demands complex engineering and close coordination with NHTSA well before an automaker accumulates replacement parts,” Chrysler says in the statement. “To accommodate the high-volume production required for this campaign, Chrysler Group had to find and enlist multiple new supplier partners to supply volume of this part that far exceeded normal demand.”

Chrysler’s statement also asserts that the company has kept NHTSA informed of all activities related to the recall campaign, which continues to progress. “Parts production has commenced,” Chrysler notes. “Our supplier partners are committed to a work schedule of three shifts per day, six days per week, with occasional Sunday production. Chrysler Group has already contacted affected customers and advised them of our intentions.”

To view a video report on the latest development, click on the photo or link above.