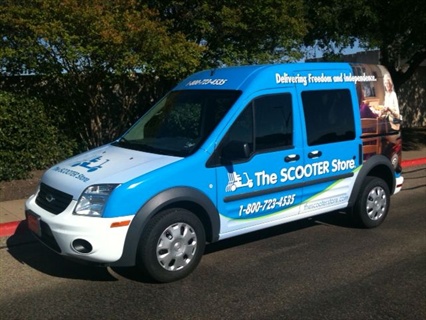 NEW BRAUNFELS, TX – The Scooter Store has significantly reduced what it spends on fuel during the last two years by changing the vehicle models in its fleet and by training drivers to conserve fuel.

The company said it is now exploring GPS-based fleet tracking and routing options to further improve routing efficiency. Automotive Fleet spoke with Chet Lange, Director of Corporate Operations for The Scooter Store, about how the company has reduced its fuel spend and where it plans to go from here.

The Scooter Store’s current fleet size is 493 vehicles. The Fleet has 415 vehicles for Distribution/Service functions and 72 vehicles used for Sales/Service positions in the company’s rehab division. The fleet has 197 Ford E-250 Cargo Vans, 158 Ford Transit Connect Vans, and 132 LWB Ford Ranger Trucks. Lange said the company estimates 10-percent growth in its fleet size in 2011. The company operates in 48 states.

The Scooter Store offers power mobility solutions, including power wheelchairs, scooters, lifts, ramps, and accessories. In addition, the company now provides Home Care solutions and related services in specific markets. The company said its goal is to create an opportunity for every senior or disabled American to live their entire life safely and confidently at home. The Scooter Store was recently recognized by Fortune magazine in its prestigious 100 Best Places to Work For in America for the second time. The company is accredited by the Accreditation Commission for Health Care. Based on the products and services the company provides, the fleet has specific vehicle requirements.

“We looked at our daily capacity, and we focused on getting a vehicle that meets those needs,” Lange said. “We have seen a 20-percent improvement in overall fuel efficiency in our fleet. It’s been a process that we’ve been moving toward since the 2008 model year.”

Lange said the company is using smaller vehicles than in years past and went to a smaller van and pickup truck.

“I think the best decision was to move from the Econoline to the Transit Connect,” Lange said. “We also integrated some Ford Rangers, but just based on our daily capacity needs we can’t go much smaller than that. Now we’re about to get to the 2012 model year. It has been a process of integrating these vehicles over the last few years, but we’re really starting to reap some of the benefits of making that decision and moving to smaller vehicles.”

Lange said the company’s focus on reducing fuel spend has been a multi-year effort, largely due to the fact that company drivers travel many miles each year given the fleet’s size.

“I did a projection earlier this year about our fuel costs and how many miles we’re going to drive, and with energy costs going through the roof,” Lange said. “Last year we drove 17 million miles, and this year we’re looking at 23 million miles. We’ve got to do something.”

The company has focused on driver education and has managed to reduce fuel spend by doing so. Lange said the company’s fleet department already works closely with its distribution department in providing route efficiency and daily driver capacity reports but that to further improve efficiency, the company must do more.

“We’ve gone to smaller vehicles, tried all areas of education about being fuel efficient. All of those things are in place now. Now we need to take one more step to run more effective routes,” Lange said. “If you can run more effective routes, then you can squeeze more routes into the day. The trickle-down effect of that is you need fewer vehicles, so you don’t have to cycle your vehicles out as often and of course your costs of operating a fleet of vehicles will go down.”

Lange said the company is looking into different GPS and telematics solutions to provide even more efficient routing.

“We’re currently exploring the option,” Lange said. “We’ve had looked at some GPS routing and tracking software in the past. We had a kick-off meeting last week to look at the best tools. That would be a decision that our distribution department would have to make. Our focus is going to be to get a system that is user friendly and that we can convince our drivers and schedulers to use.”

For more information about The Scooter Store, you can visit the company's website at www.thescooterstore.com.