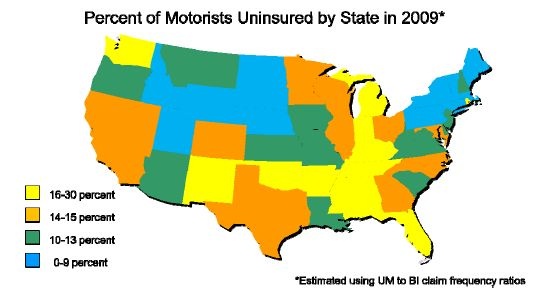 MALVERN, PA - Across the United States, chances are roughly one in seven that a driver is uninsured, according to new estimates from the Insurance Research Council (IRC).

The estimated percentage of uninsured motorists declined four straight years before rising to 14.3 percent in 2008 and dropping to 13.8 percent in 2009. The economic downturn is thought to be a major factor in the brief increase.

“The leveling trend in the percentage of uninsured motorists is an unfortunate consequence of the economic downturn and illustrates how virtually everyone is affected by recent economic developments," said Elizabeth A. Sprinkel, senior vice president of the IRC. “Despite laws in many states requiring drivers to maintain insurance, about one in seven motorists remain uninsured. This forces responsible drivers who carry insurance to bear the burden of paying for injuries caused by drivers who carry no insurance at all.”

In a new study, Uninsured Motorists, 2011 Edition, IRC estimates the percentage of uninsured drivers countrywide and in individual states for 2008 and 2009. The IRC estimates are based on the ratio of uninsured motorist (UM) insurance claim frequency to bodily injury (BI) claim frequency. UM claims are made by individuals who are injured in accidents caused by uninsured drivers. BI claims are made by individuals injured in accidents caused by insured drivers. The magnitude of the uninsured motorist problem varies from state to state.

In a previous report, the IRC anticipated a trend reversal in the countrywide estimate of the percentage of uninsured motorists, citing a strong historical relationship between the national unemployment rate and the national UM to BI ratio. The strength of the historical relationship appears to have diminished slightly with the inclusion of more recent data. Several possible reasons for this are discussed in the report. 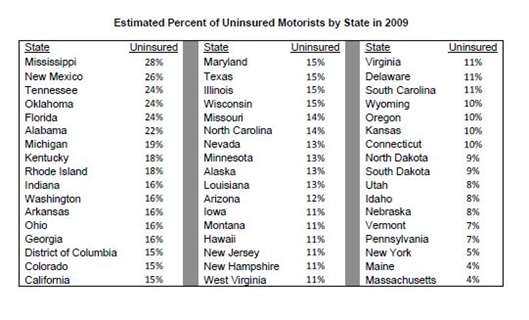