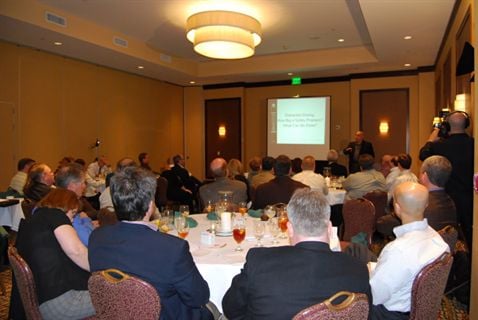 TORRANCE, CA - Fifty fleet professionals were in attendance at NAFA Pacific Southwest Chapter's recent business meeting held March 16 at the Sheraton Hotel in Cerritos, Calif. According to organizers, the event was one of the more highly attended meetings since the annual Los Angeles Auto Show gathering in December 2009.

Chapter Chair Bonnie Whidden, Kawasaki, presented a financial report during the business meeting. Whidden noted she will not continue as chair for the next term, with Tim Pfrimmer (UCLA) replacing her position. The rest of the chapter officers will remain the same.

After the business meeting, AmeriFleet Transportation's Matt Betz, VP of national account sales, made a presentation on distracted driving to help fleet managers make informed decisions regarding the risky driving behavior. With more than 30 years of experience in the rental and leasing field, Betz currently serves on the boards of NAFA, AFLA (Automotive Fleet & Leasing Association), as well as NETS (The Network of Employers for Traffic Safety).

With 4 billion cell phones in use worldwide, according to Betz, he said each new technological capability is a "new addition to distracted driving." Although a recent Nationwide Insurance study showed drivers ages 16-17 are most likely to be texting while driving, Betz said drivers ages 31-44 were found to be most likely to be multitasking while driving.

To illustrate the dangers of common daily activities considered "distracting" and their impact on driving, Betz provided a number of examples attendees could relate to in their everyday lives, such as talking on a cell phone, reading a newspaper, and applying makeup. Talking on a cell phone, Betz pointed out, is not the same as talking to a passenger, referred to as "driving with sentence listening." The difference, he noted, was that talking on a cell phone makes the brain work overtime, because drivers are "trying to visualize what the other person looks like."

In addition, he also emphasized the similarities between driving drunk and driving while fatigued, a common condition many individuals can relate to when driving home after a long day of work.

While many companies do have cell phone policies in place, Betz asked for a show of hands among the audience for those fleets who had provisions in place for distracted driving behaviors, such as drowsy driving. Most fleets in attendance did not have a policy to cover drowsy driving.

Betz also provided an update on "what's new at NAFA" at the national level.