GÖTEBORG, SWEDEN - The new Volvo C30 is Volvo's most playful and spontaneous car model, according to the manufacturer. It appeals to customers who spend most of their time in the city environment and who impose considerable demands on the car's design, driving properties, and personality. The Volvo C30 can be configured in an almost unlimited range of variants thanks to a wide selection of drivelines, design details and equipment levels. And the new C30, making its debut at the 2009 Frankfurt Motor Show, offers more choice than before.

"Since its introduction in 2006, the Volvo C30 has become highly appreciated for its unique appearance. This applies in particular to the rear. With the new front, it feels as though everything has fallen neatly into place and that the car's entire personality has been boosted to an entirely new level," says Daniel Backman, product manager for the new Volvo C30.

The new exterior is also a better match for the way the C30 drives - challenging, direct, and with a whole lot of attitude," continued Daniel Backman.

The entire front of the C30 has been redesigned, including body panels such as the front wings, giving the car a radical new appearance from the front, carving out a distinctive personality which clearly separates the new C30 from the Volvo S40 and V50, according to the manufacturer.

In the middle of the front is the new, larger iron mark just as in the rest of the Volvo range. The air intake has also grown in size and resembles the intake in the XC60. The grille has a new pattern used solely on the C30. 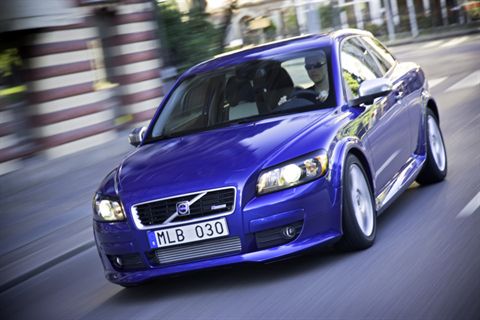 Volvo says while the biggest design changes have taken place at the front, the rear also sports the same deep new lines and detailing. The contours are wavier and more dynamic than before. The black plastic panels have been replaced with more body color lower down, in the same or a contrasting color, to forge a closer visual contact between the car and the road surface.

The new optional sport chassis for the Volvo C30 is considerably sharper, with stiffer, more distinct properties. The steering is more precise owing to the installation of stiffer bushings. The steering ratio is lower, giving 10-percent faster response to steering wheel input. Spring stiffness has been increased by no less than 30 percent to increase the car's poise in enthusiastic driving, notes Volvo. The dampers are also stiffer and are now the exclusive mono-tube type that builds up pressure much more quickly. The roll stabilizers are stiffer to reduce any leaning tendency when taking corners. The new sport chassis is available in all C30 versions except for 1.6D DRIVe.

As of spring 2009, the Volvo C30 1.6D DRIVe is available with an advanced start/stop function that switches off the engine when the car is at a standstill, for instance at traffic lights or in a traffic queue. This cuts fuel consumption to as little as 3.9 l/100 km while carbon dioxide emissions are just 104 g CO2/km, the lowest in this segment.