STUTTGART, GERMANY - Mercedes-Benz's AMG engineers are at an advanced stage in preparation of a plug-in electric version of the upcoming SLS supercar, Motor Trend's Inside Line reported. The car, to be called the SLS eDrive, is slated for a 2015 release date in low-volume production. It's based on the production SLS, which makes its own debut this fall at the 2009 Frankfurt Auto Show.

The electric SLS will get the SLS's lightweight aluminum body and gullwing doors and will share the interior of the SLS as well. The SLS's rear-wheel-drive platform will be adapted to accommodate the electric drivetrain. Among the changes will be a pushrod front suspension with horizontally mounted dampers. The space saving over the SLS's upright double-wishbone setup will accommodate two 133-horsepower motors in the front matching those in the back. As a result, the SLS eDrive is basically a four-wheel-drive car. 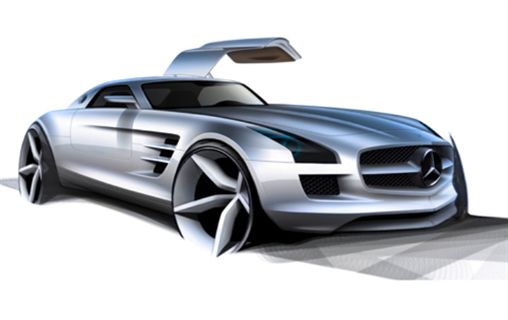 The SLS eDrive will achieve 532 hp and 649 lb.-ft. of torque, compared with the upcoming production SLS's 571 hp and 479 lb.-ft. from the updated AMG 6.2L V-8. Performance numbers haven't been officially released, but SLS eDrive Development Chief Wolf Zimmerman says the 0-60-mph time for the eDrive vehicle will be less than 4 seconds, with a top speed above 120 mph.

According to Inside Line, the vehicle's driving range will be approximately 93-112 miles, and charging time will be 5-8 hours, depending on the power source. Brake energy regeneration is expected to be featured on the eDrive.