Known for its speed and efficiency, UPS recently announced changes that will improve both. By the end of 2010, the company plans to operate more than 22,000 delivery trucks at 144 locations (including two in Canada) equipped with telematics technology.

Since 2008, UPS piloted the technology on 1,500 delivery trucks across the country, testing the equipment in various geographies and climates. In 2009, the company installed telematics in roughly 10,000 vehicles and plans to expand the program to another 10,000 this year. That makes nearly a quarter of the company's 95,000 delivery vehicles equipped with telematics.

As part of the initiative, UPS is installing GPS tracking equipment as well as sensors in key areas, such as brakes and engine box, and on the exterior. These devices will help UPS track the location of its delivery trucks as well as identify ways in which drivers can make adjustments and improve their performance based on collected data. Two key areas the company plans to improve are idle time and route efficiency.

"Telematics isn't new to UPS. We've been using telematics for more than 20 years to improve the efficiency and safety of our tractor-trailer fleet," Donna Longino, a UPS spokesperson, said. "What is new is the proprietary information and sophisticated algorithms we developed to analyze the rich stream of data captured by more than 200 sensors on our delivery trucks."

As drivers complete their routes the UPS telematics equipment captures streams of data via a 900 MHz radio and sends it in real-time to servers for analysis. At the end of the day, drivers return to their centers, and data is uploaded and sent to the UPS data center in Alpharetta, Ga. The telematics devices capture data on more than 200 elements, including speed, RPM, oil pressure, seat belt use, number of times the truck is placed in reverse, and idling time. 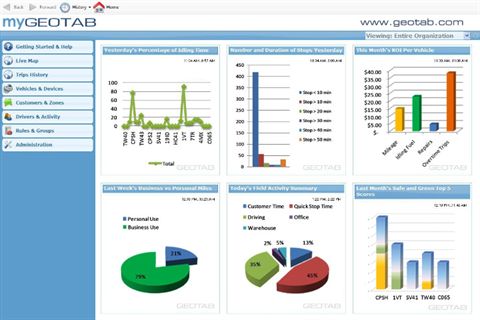 "UPS is always looking for ways to improve efficiency and customer service, slash energy consumption and emissions, and make our drivers safer on the road," said Mike Hance, vice president of fleet operations. "We realized this cutting-edge technology enables quick, fact-based decisions to improve these areas."

So far, the telematics initiative has yielded positive results, including reduced idling and fuel consumption, maintenance costs, and waste, as well as increased safety. Through telematics, UPS reduced idling by 15 minutes per driver per day, totaling 25 gallons of fuel per driver per year. While that reduction may seem a small change, on the large scale, it's a major improvement.

"When telematics is fully deployed in the small-package delivery fleet in the U.S., the reduction of idle time by 15 minutes per driver per day would save 1.4 million gallons of fuel annually," Longino said. "Multiply results like that by more than 90,000 drivers worldwide, and you can see the potential." 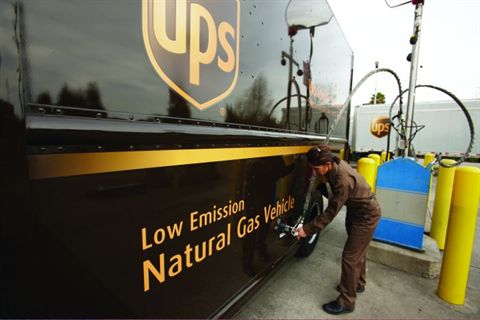 Maintenance is another key area in which UPS will benefit from the program. Prior to installing telematics, the company performed maintenance at regular time intervals, regardless of a truck's mileage or use. Now, UPS mechanics base maintenance decisions on the actual vehicle use and performance.

Telematics also helps identify which parts to replace. For instance, UPS found, in some cases, mechanics were replacing fuel injectors when the truck simply required an inexpensive "O-ring."

Because UPS can more accurately determine the right time to pull trucks off the road for maintenance, the company can reduce downtime and wasted maintenance expenses. Telematics also allows UPS to more accurately allocate replacement dollars, as the system helps identify trucks performing less efficiently, or when to simply place a vehicle on a shorter route.

Safety is another critical area of improvement. While UPS already has an exemplary safety record, the company didn't shy away from improving it. One key metric tracked through telematics is seat belt use. Test sites showed that drivers wore their seat belts a nearly perfect 99.8 percent, up from 98 percent.

Likewise, providing drivers with information on the number of times they placed trucks in reverse - behavior UPS drivers are trained to avoid for safety reasons - reduced this behavior by 25 percent.

With a large-scale implementation of telematics in its delivery truck fleet, UPS anticipated and planned for challenges. Hance said two areas were critical to the company's success: training staff and managing the information.

"We have some of the best-trained drivers in the world, and they are really committed to doing an excellent job. We find that quite often when a supervisor uses the data to coach drivers on improving safety, service, and performance, the response is very positive," Hance said.

In addition to training drivers how to improve driving behavior based on the reports, other UPS employees are also trained how to employ it to get the most from the telematics investment.

"Telematics is information-rich. Our reports and data are profiled to pinpoint what is important to impact results," Hance said. "We invested in training to ensure we leverage this technology to effectively impact service, safety, and cost."

UPS plans to continue using telematics technology, with the next major initiative focused on reducing idling time on its LTL (less than truckload) fleet at UPS Freight. Hance said telematics technology is also used to monitor several test vehicles, such as hybrid electric, hydraulic hybrid, and automatic transmission tractors, in the UPS fleet for efficiency, performance, and reliability.