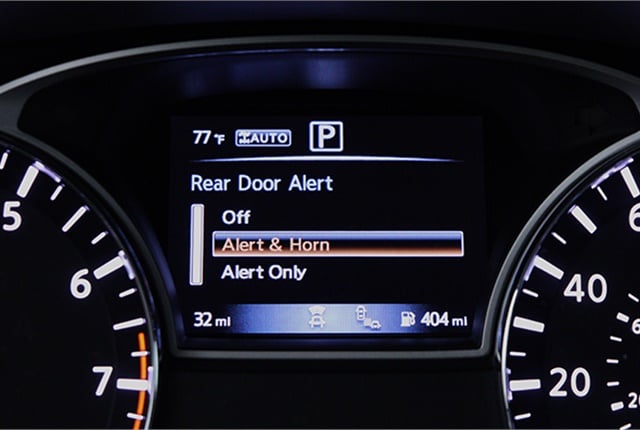 Nissan has developed Rear Door Alert, a new system that uses a center instrument panel message display and a series of horn honks to remind drivers of anything, or anyone, they may have forgotten in the rear seat after the vehicle is parked.

During summer weather, a child left inside a car or truck is at risk for vehicular heatstroke. Rear Door Alert (RDA) is designed to help prevent this deadly threat, according to the automaker.

The new feature monitors the rear door switches to detect their open-and-closed status before and after a trip, Nissan said. If the system detects that a rear door was opened and closed prior to the trip, but then was not re-opened again after the trip was completed, RDA responds with a series of notifications. These alerts start with a display in the instrument panel and progress to subtle but distinctive chirps of the horn.

Because there are so many scenarios in which a driver might open a rear door —everything from throwing in a gym bag to cleaning the car — the RDA system is easily configurable and can be turned off temporarily or permanently through prompts in the cluster display, according to Nissan.

After the two women presented their idea — with Mendoza eight months pregnant at the time — the project moved into full development at the Nissan Technical Center North America (NTCNA) in Farmington Hills, Mich. The new RDA feature will debut as standard equipment on the 2018 Nissan Pathfinder SUV in September, and will be available on other Nissan models in the coming years.

The 2018 Pathfinder, which had a mid-cycle refresh in 2017 that added engine power and automatic braking, goes on sale in September.