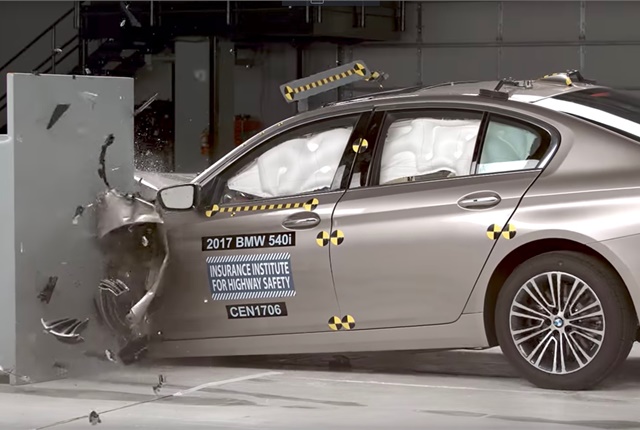 The redesigned 2017-model year BMW 5 series, after delivering an improved performance in the challenging small overlap front crash test, has earned the Top Safety Pick+ award from the Insurance Institute for Highway Safety.

The large luxury sedan qualified for the prestigious award thanks to across-the-board top crashworthiness scores, an optional front crash prevention system with a “superior” rating, and available headlights that drew a rating of “good,” IIHS said.

The sedan’s performance in the latest small overlap front crash test was markedly better than in earlier tests of the previous generation of the BMW 5 series, according to IIHS.

“In the small overlap test of the 2017 model, the driver space was maintained well, with maximum intrusion of 5 inches at the footrest,” IIHS said in a released statement about the award. “The airbags and safety belt worked well together to control the dummy’s movement, and measures taken from the dummy indicated a low risk of any significant injuries in a real-world crash of the same severity.”

(To view video footage of the crash test, click on the photo or link below the headline.)

In contrast, when the earlier model was tested, maximum intrusion reached 12 inches at the footrest, and the steering column was pushed back 3 inches toward the driver, IIHS noted. Measures taken from the dummy indicated that injuries to the left lower leg would be likely in a real-world crash, with possible injuries to the left foot as well.

To qualify for the 2017 Top Safety Pick+ award, a vehicle must draw the highest possible rating of “good” in the small overlap front, moderate overlap front, side, roof strength and head restraint tests. Additionally, the vehicle must have an available front crash prevention system with an “advanced” or “superior” rating and headlights that earn an “acceptable” or “good” rating.

The 2017 5 series has two different optional front crash prevention systems, both of which earned a “superior” rating. In IIHS track tests, cars equipped with one of these systems avoided collisions at 12 mph and 25 mph.

The 5 series also has two different headlight systems available. The headlights that come with the optional lighting or premium package earned a “good” rating, while the standard ones were rated “marginal.”