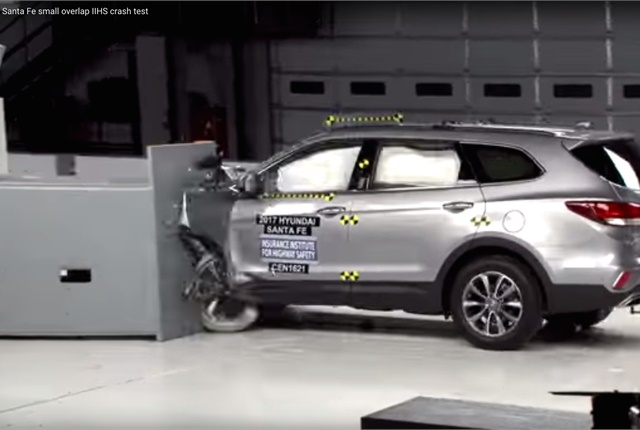 The 2017 model-year Hyundai Santa Fe, which includes improvements designed to boost protection in a small overlap front crash, has captured the Top Safety Pick+ award from the Insurance Institute for Highway Safety.

The three-row Santa Fe SUV, a distinct model from the two-row Santa Fe Sport, previously earned a “marginal” rating in the institute’s small overlap test. But the 2017 model drew a rating of “good” — the highest possible score — in that crash test.

Introduced in 2012, the small overlap front test replicates what happens when the front, driver-side corner of a vehicle collides with another vehicle or an object such as a tree or utility pole.

The earlier version of the Santa Fe suffered extensive structural damage to the driver’s space during this test, IIHS said, with intrusion measuring as much as 10 inches at the lower door hinge pillar. The dummy’s head barely contacted the frontal air bag before sliding off the left side, as the steering column moved 5 inches to the right.

As a result, the vehicle’s performance in the small overlap crash test improved markedly. Maximum intrusion was just 4 inches at the lower door hinge pillar, and the safety belt and air bags worked well to control the dummy’s movement, IIHS said.

The “good” rating applies to 2017 Santa Fe SUVs built after March, when the safety belt was changed.

The new model’s optional front crash prevention system drew the highest rating of “superior.” When equipped with the system, the Santa Fe avoided collisions in 12 mph and 25 mph track tests, according to IIHS. The system also includes a forward collision warning component that meets criteria from the National Highway Traffic Safety Administration.

According to IIHS, the low beams provide good or fair visibility on most approaches and don’t create excessive glare for oncoming drivers. Additionally, the high beams provide mostly good visibility.

The package also includes high beam assist, a feature that automatically switches between high beams and low beams, depending on the presence of other vehicles.

Without the technology package, the Santa Fe comes with halogen headlights that drew a “poor” rating from IIHS.

Currently, to qualify for the Top Safety Pick+ award, a vehicle must have “good” ratings in the five crashworthiness tests and an “advanced” or “superior” rating for front crash prevention. For 2017, a “good” or “acceptable” headlight system also will be required.

To view video footage of the Santa Fe’s small overlap crash test, click on the photo or link below the headline.