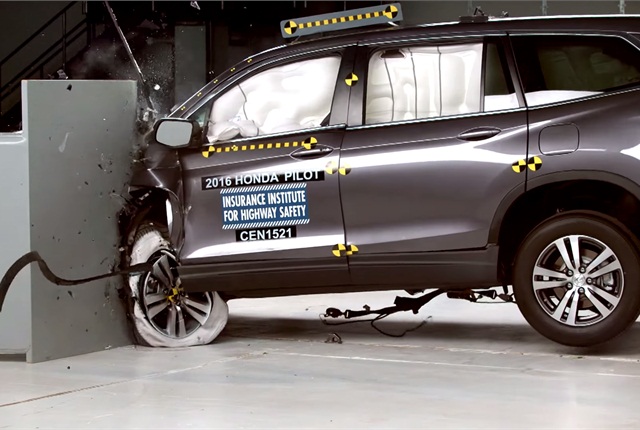 The mid-size SUV’s optional front crash prevention system drew a “superior” rating from IIHS. The autobrake prevented a collision in the institute’s 12 mph track test and cut the vehicle’s speed in half in the 25 mph test, IIHS said. The system also includes a forward collision warning feature that meets criteria set by the National Highway Traffic Safety Administration.

In particular, the 2016 model’s “good” small overlap performance represents a dramatic change from the earlier-generation Pilot, which drew a “poor” IIHS rating in that crashworthiness category.

“In the test of the latest model, the driver space held up well, with maximum intrusion of 4 inches at the parking brake pedal,” IIHS said. “The dummy’s movement was well-controlled, with the front and side curtain airbags working well together to keep the dummy in place and protect the head from contact with intruding structure and outside objects. Measures taken from the dummy showed a low risk of any significant injuries in a crash of this severity.”

Vehicles must earn a “good” or “acceptable” small overlap rating and “good” ratings in the four other tests to qualify for Top Safety Pick. The plus sign is awarded to vehicles that also have an available front crash prevention system earning an “advanced” or “superior” rating.

“These systems benefit from the adoption of a sensor fusion technology integrating the capabilities of a windshield-mounted monocular camera and front grille-mounted millimeter wave radar system to provide enhanced sensing with the ability to identify and anticipate multiple collision scenarios, including those involving a pedestrian,” Honda said. “When the system anticipates a collision or road departure, it can initiate warnings and, in certain instances, initiate emergency braking and steering.”

To view footage of the 2016 Honda Pilot's small overlap front test, click on the photo or link below the headline.