DETROIT - Ener1, Inc., a manufacturer of lithium-ion energy storage systems for transportation, utility grid, and industrial electronics applications, achieved an advance in its growing relationship with Volvo Cars. During the North American International Auto Show, Volvo President and CEO Stefan Jacoby unveiled a crash-tested C30 Electric designed with Ener1's EnerDel battery. This is the first time that a crash-tested electric car has been displayed in public, and the results reflect a successful two-year development program between Volvo and Ener1 in both Europe and the U.S. Jacoby also confirmed a test fleet of C30 Electric cars will go on the road in the U.S. in 2011 following recent announcements of fleets in Europe and Asia.

The car on display in Detroit was tested at Volvo Cars' crash test laboratory in Sweden in December 2010 with a fully charged EnerDel lithium-ion battery and was subjected to a 40-mph offset frontal collision with a barrier.  The test produced the results expected by the companies' engineers. The front deformed and distributed the crash and both the batteries and the cables, which are part of the electric system, remained intact after the collision.

"Our tests show it is vital to separate the batteries from the electric car's crumple zones to make it as safe as a conventional car," Jacoby said at a press conference.  "We are the first car maker to show the world what a truly safe electric car looks like after a collision with high-speed impact."

To ensure the battery is safely located outside of the crumple zones, Ener1 has developed a "split battery" specifically for Volvo with half the battery located in the central tunnel between the seats and the other half under the rear seats where the gas tank would normally be located.  The battery - which represents a multi-million-dollar development effort -- features Ener1's comprehensive battery management system, which is integrated with the electronics and vehicle control systems of the C30.  In the event of a collision, the crash sensor in the car cuts power in 50 milliseconds by the same signal that deploys the air bag.

The system has several fuses that cut directly if a ground fault is detected, such as a damaged cable coming into contact with the body frame.  The battery management system also optimizes capacity and actively prolongs cell life, monitors and reports the state of health and charge, controls safe and efficient pack re-charging and the cooling system for safe operating temperatures.  It has multiple levels of redundancy built into its control protocols for extra safe operation.

"Our relationship with Ener1 is founded on the quality and safety of the company's technology and chemistry," said Lennart Stegland, president of Volvo Cars Special Vehicles. "We have worked closely together as we have developed the C30 and both sides have learned a great deal from each other in this collaboration."

"We are very proud to be collaborating with Volvo to help create one of the world's most safety-focused electric vehicles," commented Ener1 Chairman and CEO Charles Gassenheimer.  "Safety is a central issue in electric vehicles and a key reason we were selected by Volvo is safety has always been the hallmark of the EnerDel battery.  Ener1 benefits greatly from collaborating with a company that is a world leader in safety and maintains the most exacting standards of quality." 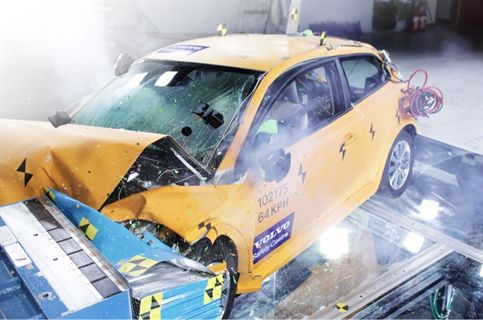 Referring to the test fleet of C30 Electric vehicles that will go on the road in the U.S. in 2011, Jacoby said, "Among other things, we will give the U.S. media opportunities to test-drive the car.  We think they will find it as enjoyable to drive and as dynamic as the standard car."

"Several car makers have launched or are in the process of introducing electric cars into the market.  We are carefully monitoring their progress and note that not everyone is approaching the safety challenges as we are.  But for us at Volvo, this issue is crystal clear.  We never compromise on our stringent safety demands."