In a move to address environmental and financial opportunities, ThyssenKrupp Elevator, headquartered in Atlanta, has begun test driving propane-powered service vehicles in Phoenix. The company sees the incorporation of propane vehicles into its fleet as a long-term sustainable solution and expects a return on investment (ROI) in Arizona in approximately three years.

A number of federal and state tax incentives are available to help offset the cost of converting to propane or to install fueling infrastructure. However, these incentives are dependent on the individual tax liability of the company converting.

"Using Phoenix as an example, there are no up-front incentives for the vehicle type/size we are using; however, we will have HOV lane access, lower registration cost, and we can purchase our fuel for under $2 per gallon," explained Tom Armstrong, ThyssenKrupp Elevator's fleet director. "We are looking for long-term fundamental sustainable solutions. For each city we enter, we will expect a ROI of some sort but, even at cost neutral, it is a win-win based on the environment."

With 3,300 fleet vehicles operating in North America, ThyssenKrupp Elevator has considerable potential for cost savings and a reduced company carbon footprint. For the propane vehicles soon to be used in the Arizona market, ThyssenKrupp Elevator partnered with ROUSH CleanTech to engineer liquid-propane fuel injection systems for Ford E-series cargo vans. There is virtually no difference in horsepower, torque, or towing capacity between the propane and traditional vans.

"We're excited for ThyssenKrupp Elevator to take on this leadership role," said Jack Roush, CEO of ROUSH Enterprises. "Propane continues to be a leading alternative fuel that is available right now, at an economical price, and helps to reduce emissions, which results in cleaner air for everyone to breathe." 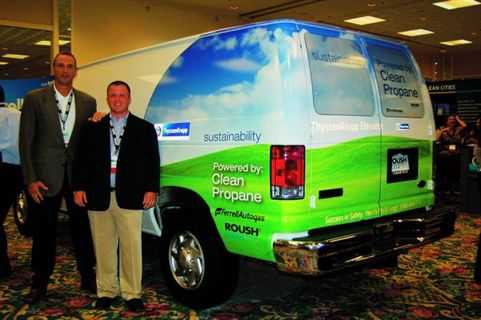 ThyssenKrupp Elevator plans to eventually expand its propane-powered fleet into other markets.

"We expect the pilot program in Phoenix to lead to significant cost savings in both fuel usage and maintenance intervals," Armstrong said. "A successful pilot will launch the use of alternative fuels in all our North American markets in the future, which will reduce the operating costs for our fleet overall."

ThyssenKrupp Elevator has approximately eight major cities on its shortlist for propane vehicles, but selected Phoenix as its pilot due to [propane provider] Ferrellgas' commitment to enhancing the fueling infrastructure in the Phoenix market.

"The switch to a more eco-friendly fuel is part of ThyssenKrupp Elevator's commitment to the environment," said Brad Nemeth, the company's director of sustainability. "We are committed to reducing our carbon footprint. One of our targets is a 20-percent improvement in fuel efficiency, so we are exploring alternative fuels like propane."

According to Nemeth, ThyssenKrupp Elevator is committed to seeking innovative ways to reduce the consumption of resources in everything the company does. "Our vision is simple: waste nothing. Our goal is to recognize and appreciate that every resource available to us has a significant value. Through the appreciation of this culture of valuing each resource as precious, we understand that inefficient use of resources is not an option."