In an age where technical advancements oversaturate the marketplace, fleet managers find themselves wading through the latest breakthroughs, hoping to find the one gem that will truly help their operations. Phil Schreiber, fleet manager North America for Otis Elevator, is no different.

"We get so many e-mails and advertisements that when I get information on new products, I give it five seconds and make a decision to trash it or investigate further," he said. Recently, one product caught Schreiber's eye: Spitzlift portable cranes. "The instant I saw it, I decided to look further."

Spitzlifts are portable cranes that can be mounted on trucks and other fleet units. Weighing only 30-40 lbs., they can lift up to 900 lbs., and be folded for storage. This lightweight, modular design allows workers to use the cranes both on fleet units and at jobsites, and with minimal payload impact - features very attractive to Schreiber and his colleagues.

"The whole thing weighs around 37 lbs. without the battery," he said. "Everyone could lift it with no problem - and it can lift 900 lbs. - 30 times its weight. What else can do that? After seeing that, I was really intrigued." 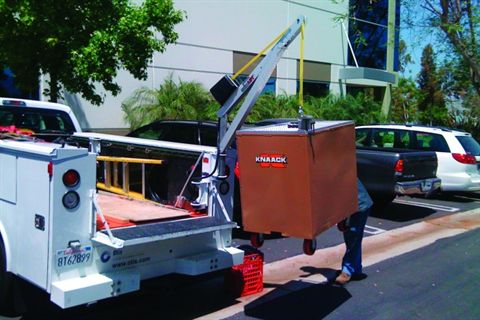 An Economical Alternative to Upfitting

In addition to lifting items 30 times its weight, Spitzlifts also solved a serious issue for Otis Elevator's fleet. In the past, the company would put a service body with a liftgate on Ford F-350 trucks to lift heavy equipment - often weighing more than 1 ton - in and out of fleet units. For a long time, the F-350s did the trick. That is, until the gasoline crunch came.

When fuel costs were around $4 per gallon, the F-350s were getting 10 mpg at best. So, Schreiber started purchasing F-250s with service bodies. However, due to OEM recommendations, he couldn't upfit the smaller trucks with a liftgate - the chassis just couldn't take the weight. While the F-250s were more fuel-efficient, they wouldn't be able to lift or lower heavy items, a critical job function for Otis employees.

"In our business, you need 3,000-7,000 lbs. of equipment and supplies to do the job," Schreiber explained. "If you don't have a liftgate, you can't even get the equipment in the truck. But, all of a sudden, this 37-lb. crane comes to the rescue. We took two F-250 trucks and put the crane to work. It was an immediate success."

The instant success of the first Spitzlifts launched a pilot program in Otis' San Diego branch. "They jumped on the opportunity to do the pilot program. The rest is history, because they liked it right away," Schreiber said.

One Tool, Many Applications

Schreiber said the portability of the cranes not only helped with fleet units - it also helped on jobsites. With Spitzlifts, Schreiber's team can buy multiple mounting pieces and only a few cranes. Because not every truck needs a crane every day, Schreiber's team started looking for other uses. They found the cranes can be used on dollies or other equipment used on indoor jobs.

That meant the investment in cranes could be fully realized - and by only purchasing inexpensive mounts. With multiple mounts for trucks, dollies, and other equipment, the company only had to invest in a few cranes that could be shared, whereas with liftgates, Schreiber was forced to shoulder the costs of one for each vehicle. Further, with upfitting, the liftgate is tied to the vehicle and can't be used for other applications.

"It's a tremendous money-saver because you don't have to have a one-to-one ratio with cranes. That's the appeal for this piece of equipment. From our perspective, we found many uses - it solved the issue of the F-250 service body and we found other uses in day-to-day jobs in machinery rooms. It's economical and became a good solution for us," Schreiber said.

Eric Belio, maintenance supervisor in Otis' San Diego office, said his employees have used Spitzlifts in multiple applications.
"We use the Spitzlift in a number of ways, including submersible pump motor replacement, hoisting drive sheaves to machine rooms, and loading items into the trucks," noted Belio.

Finding multiple uses for the cranes also helped the company save time on jobs and decrease injury. "We know of specific jobs where a crane was used in the machine room, and hours were cut from the job," Schreiber said. "We also know every time we use Spitzlift it replaces muscle, which means you have less chance of injury," he said.

Belio agrees. "The benefits of using this tool are many. The best one is the mechanics can push a button all day with no fatigue, versus chain fall or lever hoists," he said. "You can also always walk away from the load, and the Spitzlift is lighter than most lever hoists. It can be set up very quickly."

After the success of the pilot program, Belio said his team continues to look for more ways to use the tool, such as machine ring and worm replacement, generator repairs, and Gen2 brake and motor removal. "The tool has worked flawlessly in each situation we have encountered," he said. "Everyone likes it, and the guys are always looking for ways to implement the tool in other repairs. It is light and very easy to use."

Schreiber believes use of the Spitzlifts have been "a very good experience for all of us and to work together. The number of Spitzlifts in our fleet will grow. Obviously there is a need for something like this because we're always looking to get the new gadget that will make life easier. This does that and lets you perform the job better and with less risk."