Fleet managers can develop a better action plan for improving fleet driver safety while reducing accidents and other incidents with the help of a new in-vehicle, video-based study by SmartDrive Systems, a driver safety and fleet savings solutions provider.

Released in late August, the study investigated more than 50 types of driver distractions and determined commercial drivers are distracted an average of 8 percent of active driving time. The study also revealed evidence showing businesses that institute some level of safe-driving policies designed to reduce distractions will positively impact their fleets.

The study reviewed nearly 6,200 vehicle-years of data across nearly 25,000 drivers from 384 commercial fleets. Researchers evaluated video records for distractions that can't be quantified by non-video approaches, such as cell phone use, texting, use of maps or navigation, eating, drinking, smoking, and other distractions resulting in drivers taking their eyes off the road for more than two consecutive seconds.

The research also examined incidents in which drivers' hands are engaged with something other than driving for more than three consecutive seconds.

Through the use of SmartDrive programs, those fleets were able to slash these risks by 50 percent or more, the study found. Other such solutions can also have a positive impact on vehicle fleets.

Reasons for distracted fleet driving can vary. However, software and hardware products offered by such companies as SmartDrive can help identify those reasons. With an in-vehicle video camera, the San Diego-based company's program captures events with a 55-point safety review and analyzes the reasons for distracted driving.

Perhaps the most serious type of distraction is text messaging or e-mailing with a cell phone while operating a vehicle. A recent study by the Federal Motor Carriers Safety Administration and the Virginia Tech Transportation Institute indicates texting while driving increases the risk of an accident or incident by 23 times.

Using a program such as SmartDrive Systems, fleet managers can record risky driving behavior. Recorded video is triggered by a G-force event - acceleration, sudden side-to-side movement, heavy braking, or a manual trigger by the driver.

Loomis Armored, an armored transport service, recently deployed the SmartDrive fleet safety solution in 1,000 units of its armored vehicle fleet.
"We have been able to quantifiably reduce our collisions, send drivers home safe at night, and reduce our fleet expenses with the help of SmartDrive," said Danny Pack, senior vice president of risk management at Loomis. "Being able to do both simultaneously is very rewarding for the company and our employees."

The recorded data can reveal to fleet managers much about the causes of distracted driving. They can use it as a positive reinforcement tool, not to punish drivers, but to offer constructive criticism and lessons on improving driving performance.

"I think anyone would be surprised by their own road behaviors," said Jeff Seacrist, marketing director for SmartDrive Systems.

The company works with fleet managers and coaches who review the in-vehicle video data generated by the system. Fleet managers and coaches then search for fleet events based upon specific events, individual drivers, vehicle type, and more, analyzing the biggest risks to fleet performance and accidents, while setting policies to help reduce driving risk.

"Many fleets can better develop zero-tolerance policies when they have this type of video data available," Seacrist said. "You can identify some of these policies such as mandated seat belt use, stricter guidelines surrounding the speeds at which fleet drivers can go, and banning handheld cell phone use, or cell phone use of any kind while driving."
In some cases, fleet drivers may be expected to regularly contact their home office by cell phone while on the road. The recent SmartDrive study indicated a policy eliminating such use contributes significantly to reducing on-road distractions.

"These recent studies demonstrate the importance of fleets taking proactive measures to minimize the risk of driver distraction in their operations," said Greg Drew, president and CEO of SmartDrive Systems. "Fortunately, it is possible for fleets to realize significant reductions in specific behaviors. The effort spent can have a dramatic impact on collisions, saving lives and money."

Any action that contributes to a driver taking his or her eyes off the road is extremely dangerous, the study shows. According to Seacrist, the study's basic findings match the general philosophy behind Heinrich's Pyramid. This theory, originated in 1931 by H.W. Heinrich, is detailed in his book, Industrial Accident Prevention: A Scientific Approach.

"Attacking that 300 number and trying to reduce it is what we specialize in," Seacrist said. "By doing that, we reduce the cost increases related to insurance, liability, Workers' Compensation, and the reputation of a business or department itself because of accidents that started with a distraction."

SmartDrive estimates several of its customers have seen anywhere 25- to 50-percent reductions in collision frequency when using the system.
"Our customers are in the risk management business, so it purely comes down to a financial decision," Seacrist said. 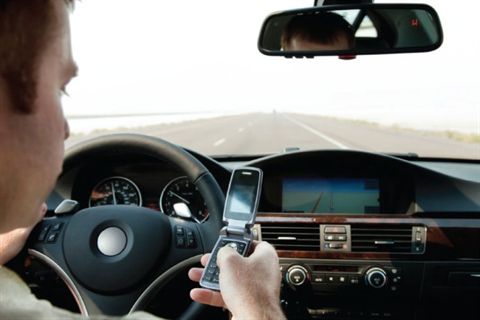 Fleet managers must work with repeat offenders to better justify the costs of such a program, Seacrist said. When drivers are constructively told of their poor driving habits, it is common for them to improve.
In addition, commercial fleet drivers can directly benefit from the use of such programs from a safety perspective. In fact, video evidence of actions that led up to a crash may completely exonerate a driver if an accident is another driver's fault.

Distraction problems recorded on a map can better identify trends in speed-related events. Objective data can yield important driver requirements, such as a three-second pause before acceleration. Other chronic problems can also be handled in a similar way.

"The benefits generally outweigh the Big Brother aspect of these programs," Seacrist said. "It may be a humbling and emotional experience for a driver to be told how he or she can improve or what they are doing wrong, but when the evidence is right there, it makes sense."
He added, "It's about helping drivers realize what they can improve to better protect themselves and the company."

Some fleets have developed incentive programs for drivers with zero-fault driving records, which can help motivate them to adhere to lessons learned and non-distracted driving practices. Drivers then share in the benefits of insurance and other monetary savings.

As part of its study, SmartDrive continued to measure ongoing improvement for individual drivers over the initial five months following implementation of the SmartDrive Measured Safety Program. With this program, fleet managers proactively coach drivers, using the video-based data and then scoring and prioritizing driving behavior with the SmartDrive Expert Review.