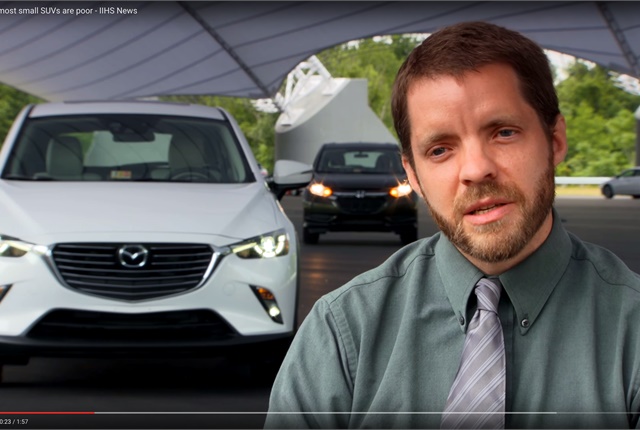 The Insurance Institute for Highway Safety evaluated the available headlights for 21 compact SUVs, but none of them drew the highest rating of “good” and only four models are available with headlights rated as “acceptable.”

Among the 21 vehicles tested, there are 47 different headlight combinations available, IIHS noted. More than two-thirds of them drew a “poor” rating, making this group of vehicles even more deficient in lighting quality than the mid-size cars that IIHS rated earlier this year.

“Government standards are based on laboratory tests, which don’t accurately gauge performance in real-world driving,” the organization said in a released statement about the test results. “The issue merits attention because about half of traffic deaths occur either in the dark or around dawn or dusk.”

As with mid-size cars, the IIHS evaluations of small SUVs showed that a vehicle’s price tag doesn’t correspond to the quality of headlights. More modern lighting types, including high-intensity discharge (HID) and light-emitting diode (LED) lamps — along with curve-adaptive systems, which swivel in the direction of steering — also are no guarantee of good performance, according to IIHS.

The best-performing headlights in the small SUV group belong to a new model, the Mazda CX-3, and are available on its Grand Touring trim. These lamps are curve-adaptive LED lights with optional high-beam assist. The low beams perform well on both right curves and fairly well on the straightaway and sharp left curve, IIHS said. However, they provide inadequate light on the gradual left curve. The high beams perform well on most approaches.

The other vehicles available with “acceptable” headlights, IIHS said, are the Ford Escape, the Honda CR-V, and the Hyundai Tucson. None of the three are curve-adaptive, and only the Escape has high-beam assist. Still, all of them provide fair or good illumination in most scenarios, according to IIHS.

The model that fared the worst in the headlights testing was the 2016 Honda HR-V.

“The illumination provided by the HR-V’s halogen low beams and high beams is inadequate on all four curves and on the straightaway,” IIHS said. The HR-V is one of 12 small SUVs that can’t be purchased with anything other than “poor”-rated headlights.

For 2017, vehicles will need “good” or “acceptable” headlights in order to qualify for the institute's highest award, Top Safety Pick+.

While studies have pointed to advantages for advanced lighting systems, the IIHS rating system doesn’t favor one type of technology over the other. Instead, evaluations measure the amount of usable light provided by low beams and high beams as vehicles travel on straightaways and curves.

IIHS engineers evaluate headlights on the Vehicle Research Center's track after dark. A special device measures how far the light is projected as the vehicle is driven on five approaches: traveling straight, a sharp left curve, a sharp right curve, a gradual left curve, and a gradual right curve.

Glare from low beams for oncoming drivers is also measured in each scenario. A vehicle with excessive glare on any of the approaches can’t earn a rating higher than “marginal.”

The only type of technology given an explicit nod in the ratings is high-beam assist, which automatically switches between high and low beams based on the presence of other vehicles. Vehicles can earn extra credit for this feature because of its potential to increase low rates of high-beam use, IIHS said.

Seventeen of the rated SUV headlight combinations have unacceptable glare, IIHS concluded. They include all types of lights — halogen, HID, and LED — and none of the headlight types is more likely than the others to have excessive glare. Three of the 17 fell short of an “acceptable” rating on the basis of glare alone.

IIHS plans to conduct headlight tests on pickups next.

To view an IIHS video about the headlight test results, click on the photo or link below the headline.