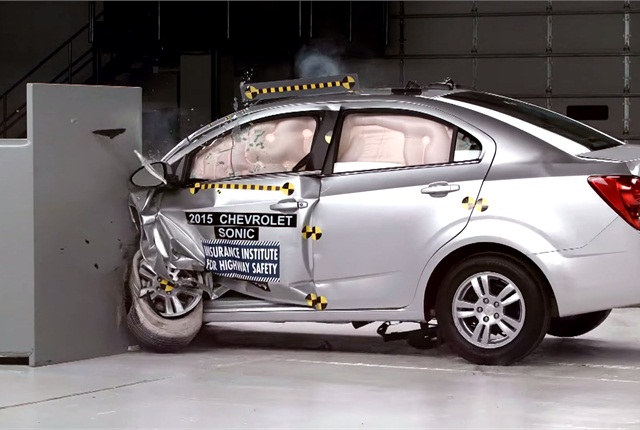 After undergoing changes to its structure and air bags, the 2015 model-year Chevrolet Sonic has drawn the Top Safety Pick award from the Insurance Institute for Highway Safety.

The vehicle modifications lifted the subcompact car’s rating for small overlap front crash protection from “marginal” to “good,” IIHS said. To view test video footage, click on the photo or link above.

The new overall rating applies to both sedan and hatchback versions of the Sonic built after February 2015.

Chevrolet made improvements to the front-end structure, door sill and door hinge pillar. In addition, the side curtain air bags were lengthened and reprogrammed to deploy earlier in small overlap crashes.

In the latest test, “the driver space was maintained reasonably well, with maximum intrusion of 4 inches at the footrest and adjacent footwell,” IIHS said. “That’s less than the 6 inches of intrusion in the lower interior that occurred in the earlier test.”

IIHS described the dummy’s movement in the latest test as “well-controlled.” The head hit the front air bag and stayed there until the rebound. The side curtain air bag deployed and had enough forward coverage to protect the head from contact with the side structure and outside objects.

“In contrast, the curtain airbag in the earlier test deployed too late, and the dummy's head ended up between the airbag and the side structure,” IIHS said.

The Sonic also drew “good” ratings in the moderate overlap front, side, roof strength and head restraint tests. To qualify as a Top Safety Pick, a vehicle must have “good” ratings in those four tests and a “good” or “acceptable” small overlap rating.

The Sonic is available with an optional forward collision warning system that earned a “basic” rating from IIHS for front crash prevention.