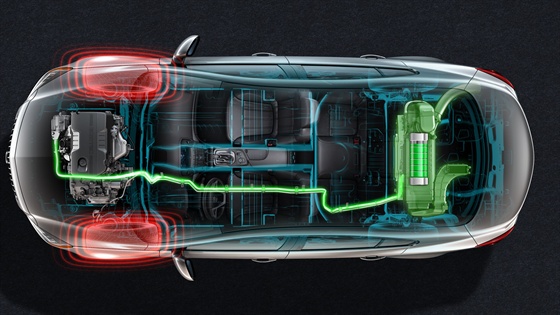 CHICAGO – Buick will offer its new eAssist fuel-saving technology on the 2012 Regal, which the automaker said improves overall fuel economy by 25 percent over the 2011 four-cylinder/six-speed powertrain. Estimated fuel economy is 26 mpg city and 37 mpg on the highway (pending EPA certification).

The system uses an 115v lithium-ion battery and a 15-kW induction motor-generator to increase fuel economy through regenerative breaking, which provides up to 15 kW of electricity to charge the batter; automatic engine shut-off when the vehicle stops; fuel cut-off during deceleration down to zero vehicle speed, enabled by the torque smoothing provided by the induction motor-generator unit; intelligence charge/discharge of the high-voltage battery.

The eAssist power pack contains the lithium-ion battery pack, the integrated power inverter and 12v power supply. It is located in a compartment between the rear seat and trunk. It weighs about 65 pounds (29 kg). The 2012 Regal offers slightly less trunk space when compared with 2011 models with the four-cylinder/six-speed powertrain but still provides 11.1 cubic feet (314 liters) of storage. A quiet electric fan cools the power pack, drawing air from a vent located in the package tray, behind the rear seat. 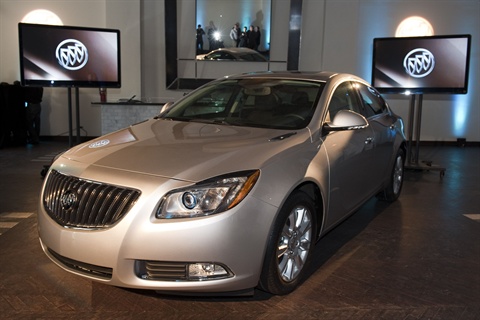 In the Regal with eAssist, the engine is rated at 182 horsepower (136 kW) and the company’s Hydra-Matic 6T40 transmission technology features a number of changes designed to improve efficiency and work with the eAssist system. Significant internal transmission changes to clutch controls and hardware provide reduced spin losses while improving shift response and time. The added electric power provided by the eAssist system allows for higher gearing to improve steady state efficiency without impacting acceleration performance or driveability, Buick stated. The system’s ability to provide some electric assistance at cruising speeds allows the driver to accelerate lightly or ascend mild grades without the transmission downshifting. 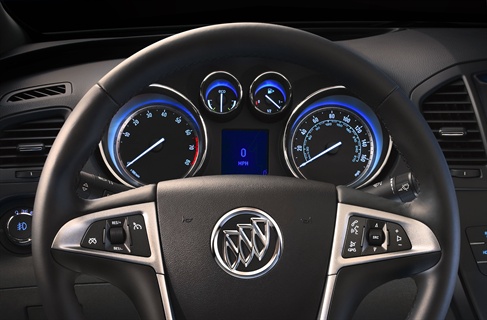 In addition to these automatic features, the 2012 Regal offers a number of other options designed to allow a driver to further optimize fuel usage. First, the Regal features a driver-selectable, fuel economy-optimizing mode for the air conditioning system, which enables more frequent and longer-duration engine stop periods. Next, the Regal offers an ECO gauge on the instrument panel that continuously responds to driving behavior, which is designed to enable the driver to drive with greater efficiency. The vehicle also provides a power flow readout in the 7-inch infotainment screen, which shows the flow of energy through the electric assist system, such as battery charging from regeneration and electric power directed to the engine.