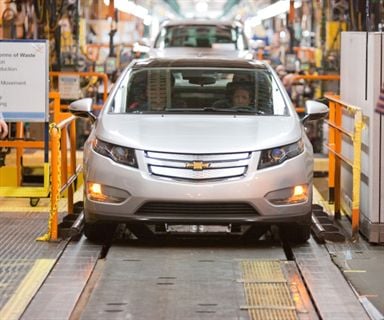 HAMTRAMCK, MI - The first pre-production Volt rolled off the line at the Detroit Hamtramck Assembly Plant March 31, according to General Motors.

These pre-production versions of the Volt will not be sold at dealerships, but will be used to assure all steps in the production system will meet the quality targets set by the Volt engineering team.

Assembly workers will build more pre-production Volts in the coming months. These vehicles will be examined by manufacturing engineers as the plant prepares to build retail models later this year.

"We have a very experienced workforce at this plant and through all of their preparation and training workers here have been given the privilege to take GM into the future with this car," said Detroit-Hamtramck plant manager Teri Quigley.

The Chevrolet Volt electric vehicle with extended range delivers up to 40 miles of pure electric driving before an engine-generator kicks in to sustain the battery charge and seamlessly extends the range to about 300 additional miles.