A big company with a big fleet can make a big green difference. That’s what Cox Enterprises is aiming to do with "Cox Conserves," a corporate program that includes the company’s six major subsidiaries, with more than 83,000 employees and 15,000-plus vehicles.

"Our main goal is to reduce our carbon footprint by an additional 20 percent by 2017," said Mike Mannheimer, vice president and chief procurement officer in the supply chain services group of Cox Enterprises. (Cox had already reduced its carbon footprint by 10 percent between 2000 and 2006.) The program was officially launched in 2007, allowing the company 10 years to work toward the goal.

Cox Conserves addresses both work vehicles, such as those used in Cox Communications’ broadband communications business, and company cars provided as perks to executives.

The program also makes available branded hybrid cars for employees who take alternative forms of transportation to and from work. Employees can check out cars during the day if attending an off-site meeting or running an errand. The company also designated preferred parking at its corporate headquarters for fuel-efficient vehicles. 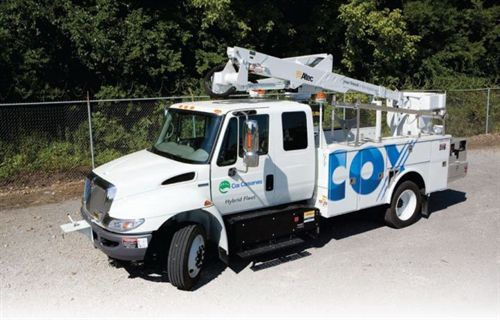 The terms under which executives are provided cars have been structured to favor those who choose fuel-efficient makes and models.

"Any executive entitled to a company car has to get a fuel-efficient vehicle," said Mannheimer, who heads the Cox Conserves program. "Our definition of that is 27 miles per gallon or better, city or highway."

Originally, the benchmark was 30 miles per gallon, Mannheimer said, but the Environmental Protection Agency changed its method of measuring fuel efficiency in 2007, resulting in a mpg decrease of approximately 10 percent for most vehicles; for the Cox Conserves program, a corresponding adjustment was made.

The 1,200 executives who qualify for company vehicles are categorized in one of 10 levels (1 being the highest) in a "vehicle hierarchy," depending on their position. Each level has a dollar limit. An executive at level six, for example, can buy any vehicle he or she wants up to the dollar limit for that level — as long as it gets 27 mpg or more.

"We have a pretty liberal policy," Mannheimer said. "If you choose a vehicle that gets better than 32 miles per gallon, you would move from level six to level five — you basically get a better car." 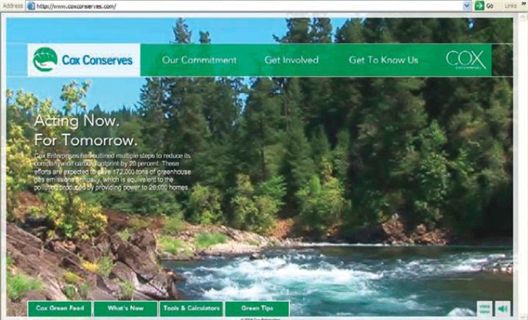 Under one option, which pre-dates the Cox Conserves project, executives may take a cash allowance equivalent to the amount of money it would cost the company to furnish a vehicle. The recipient can put the money toward operating his or her own vehicle. However, that choice comes with a new wrinkle with the implementation of Cox Conserves.

"Since the goal of this program is to get everyone into fuel-efficient vehicles," Mannheimer said, "those who opt for the cash allowance must provide us proof of ownership of a personal vehicle that gets 27 miles or more per gallon. That qualifies them for 100 percent of the allowance."

Further, increases and decreases in the allowance are based on the vehicle’s fuel efficiency. For instance, if the personal vehicle is rated at more than 32 miles per gallon, the allowance increases to 125 percent.

Cox Enterprises puts a premium on the use of hybrid vehicles as much as possible, including the hybrid model of the Ford Escape and new hybrid models of International bucket trucks. Nine of the International trucks went into service in Cox Communications in July, Mannheimer said. The trucks feature an Eaton hybrid powertrain. An electric motor assists a gasoline engine; a battery pack is recharged while the vehicles are driven on gasoline power, and during braking.

Once a hybrid International truck is switched off, the lift can operate for about an hour without running the vehicle engine. "That saves a lot of pollution and a lot of noise," Mannheimer said, the latter benefit much appreciated "when we’re in your neighborhood at two in the morning to fix a problem."