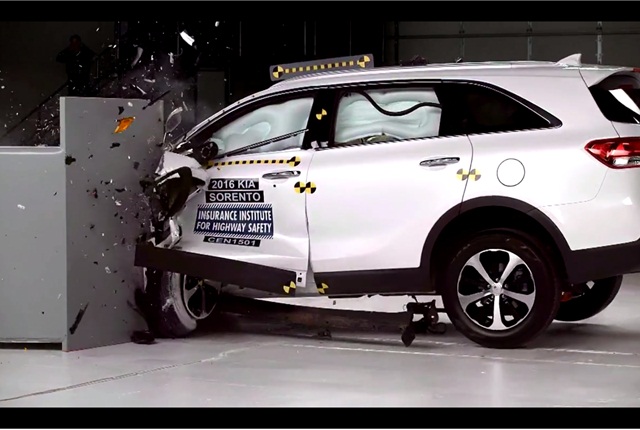 Because of a redesign for the 2016 model year, the Kia Sorento has dramatically improved its small overlap front crash test rating and earned a Top Safety Pick award from the Insurance Institute for Highway Safety.

In the small overlap crash test, the driver space of the new Sorento was “maintained well, with maximum intrusion of less than 4 inches at the footrest,” IIHS said. “The dummy's movement was well-controlled, and the front and side curtain airbags worked well together to keep the head away from any stiff structure or outside objects.”

Measures taken from the dummy indicated a low risk of any significant injuries in a crash of this severity, IIHS added.

The latest test results showed marked improvement from the previous-generation Sorento. In the test of the 2014 model, IIHS found the driver's space “seriously compromised, with intrusion measuring as much as 11 inches at the parking brake pedal. The side curtain airbag didn't deploy, and the dummy's head barely contacted the front airbag before sliding off the left side, as the steering column moved to the right.”

Introduced in 2012, the small overlap test replicates what happens when the front corner of a vehicle collides with another vehicle or an object such as a tree or a utility pole.

The award is given to vehicles that earn a “good” or “acceptable” small overlap rating and “good” ratings in the other four crashworthiness tests.

The Sorento is available with optional forward collision warning, earning it a “basic” rating for front crash prevention.

To view video footage of the 2016 Kia Sorento's IIHS small overlap crash test, click on the photo or link below the headline.