Originally scheduled for implementation on 2010 model-year vehicles, the National Highway Traffic Safety Administration (NHTSA) postponed for one year changes to its 5-star government safety rating program - offering automakers more time to meet the agency's requirements and enabling drivers to become familiar with the revised safety ratings before purchasing a vehicle.

Changes include new test dummies and injury criteria for the frontal crash test and side impact program, an additional new side pole test, an overall summary rating, and a new program to promote advanced crash avoidance technologies.

All vehicles sold in the United States must comply with Federal Motor Vehicle Safety Standards, covering a broad range of safety concerns from windshield wipers and brakes to crashworthiness and fuel integrity. To rate compliance with these standards, the NHTSA's New Car Assessment Program (NCAP) provides "government 5-star ratings" with vehicle safety information, primarily front and side crash rating results, and more recently rollover ratings. Results are relayed to consumers via a recognizable star rating system of 1 to 5 stars, with 5 being the highest. 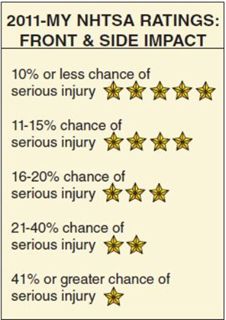 Initiated in 1978 with the primary purpose of providing consumers a measure of the relative safety potential of vehicles in frontal crashes, the NCAP later added side crash rating results to the program beginning with model-year 1997 vehicles. Rollover ratings were added with model-year 2001 vehicles.

With the NCAP's system, vehicle manufacturers are driven by market incentives - rather than regulatory directives - to voluntarily design vehicles to better protect occupants in a crash and be less susceptible to rollover.

Starting with 2011-MY vehicles,  NHTSA will implement the following changes.

Frontal crash. NHTSA will maintain the 35-mph full frontal barrier test protocol, but will update the test dummies to include a female dummy and associated injury criteria used to assess and assign a vehicle's frontal impact star rating.

Crash-rating dummies representing an average-sized adult are placed in driver and front passenger seats, secured with the vehicle's seatbelts, and vehicles are crashed into a fixed barrier, equivalent to a head-on collision between two similar vehicles each moving at 35 mph.
Instruments measure the force of impact to each dummy's head, neck, chest, pelvis, legs, and feet. Frontal star ratings indicate the chance of a serious head and chest injury to the driver and right front seat passenger. A serious injury is one requiring immediate hospitalization and may be life-threatening.

Side impact. NHTSA will maintain the current moving deformable barrier test at 38.5 mph, but will update to include new side impact test dummies and new injury criteria used to assign a vehicle's side impact rating. Additionally, vehicles will be assessed using a new pole test and small female crash test dummy.

Crash-rating dummies are placed in driver and rear passenger seats (driver's side) and secured with the vehicle's seat belts. The side crash rating represents an intersection-type collision with a 3,015-lb. barrier moving at 38.5 mph into a standing vehicle. The moving barrier is covered with material with "give" to replicate the front of a vehicle.

Instruments measure the force of impact to each dummy's head, neck, chest, and pelvis. Side-collision star ratings indicate the chance of a serious chest injury for the driver, front seat passenger, and the rear seat passenger (first- and second-row occupants). Head injury, although measured, is not currently included in the star rating. An excessive head injury score (HIC greater than 1,000) is reported separately as a safety concern. As with the frontal crash ratings, a serious injury is one requiring immediate hospitalization and may be life-threatening.

Rollover. The agency will continue to rate vehicles for rollover propensity, but will wait to update its rollover risk model to allow for more real-world crash data of vehicles equipped with electronic stability control. It will also  implement a new ratings program to rate vehicles on the presence of select advanced technologies and establish a new overall Vehicle Safety Score combining star ratings from the front, side, and rollover programs.
Finally, for the agency's vehicle labeling program, the side score will be based on the combination of the moving deformable barrier test and the pole test, rather than just the moving deformable barrier test. Additionally, NHTSA will initiate rulemaking to include the new overall crashworthiness rating on the Monroney label.