Thinking of the Newbies of the Future

A lot has changed in the past 10-15 years, so we can only imagine this momentum will continue into the next decade-plus. How will this change impact the fleet manager of tomorrow?

Work truck fleets run fewer miles than the typical car fleet, but companies hold these vehicles longer until they get into the costly area of maintenance, including preventive maintenance intervals. Every part of a work truck is driven harder.

Even though I have been critical (constructively so, I hope) in past years, after a good deal of thought, it occurs to me that NAFA needs strong continued support from the entire industry.

Sometimes, a Mystery is Nothing More than an Enigma

In late February, virtually every member of the NAFA office staff received a new or additional assignment and a new title to go with it. All to meet the goals of their "very aggressive strategic plans" (no specifics identified).

The Shortest Distance from Point 'A' to Point 'B'

This year, the Fleet Safety Conference will demonstrate the latest developments in technology and the use of predictive analytics and other metrics to identify at-risk drivers.

Be Careful What You Wish For!

Fuel or Resale: Where Can You Find the Biggest Savings Now?

With mpg improving with each new model and prices at the pump receding, some are forgetting the more expensive depreciation cost.

Set Your Priorities for Another Challenging Year

Make sure that you not only learn about resale values, but you should be getting a free (customary for dealers and fleets) lunch at your favorite auction. Maybe your FMC is taking it for you.

From my own experience, nothing gets an exec's attention more than a testimonial on a potential money-saving idea. And, why not make the benefit come back to the fleet manager?

Leveraging the Strategic Relationship Between Corporate Execs and Fleet Managers

Ever since the NAFA Fleet Management Association announced its Beyond Fleet (many hats) initiative about two years ago, I (and our entire staff) have been 100-percent supportive of the program. We've been working closely with NAFA to make the campaign as effective as possible.

Going Deep Into the Alt-Fuel Universe

The world has changed since we presented our first Green Fleet Conference six years ago. Today, fleet managers are looking for facts. That’s where we come in.

I kept looking at the two-page promo for what we internally call our “F&I Show.” It’s successful and regularly draws nearly 1,000 dealer and dealer-related managers. Still, the ad bothered me.

They Call it ‘Baptism Under Fire’

It’s not in any study book; you won’t earn a certificate to verify your status from any NAFA test. You may not even realize how you are finally recognized and honored to join that special group known as professional fleet managers. 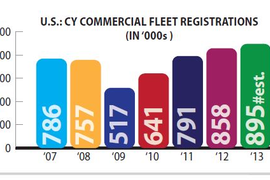 Why Mainstream Industry Knowledge Can Help You With Your Job

Everyone has a budget these days. Everyone has a CFO or boss of some kind who wants you to do more with less. You’re expected to defend your turf. Here’s how to become a star.

Are Your Drivers Really the Wild Card in Your MPG-Seeking Goal?

Maybe “yes” if you believe the experts who say that up to 30 percent of a vehicle’s efficiency is impacted by driver behavior. Maybe “no” if you are not influencing your drivers.