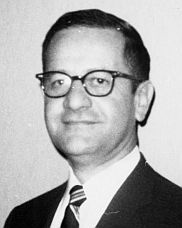 Born in Minneapolis in 1922, Bud Grossman attended North High School, and graduated with a B.A. from the University of Minnesota in 1941. From 1942 through 1945, Grossman served as a pilot in the Army Air Corps, testing planes and teaching instrument flying. Returning to Minneapolis after World War II, he went to work in the family retail automobile business, and with his brother Harold Grossman, operated a chain of car dealerships for the next 32 years. The Grossmans founded General Leasing Company in 1956, which eventually became Gelco Corporation, one of the largest transportation leasing companies in the world. The company was sold in 1987 to GE Capital.

In addition, Grossman was also a co-founder and chairman of the board of Dyco Petroleum Corp.

N. Bud Grossman, co-founder of General Leasing Company (later named Gelco) and past president of the American Automotive Leasing Association (AALA), passed away January 11, 2010, from Alzheimer's disease at his home in Paradise Valley, Ariz. He was 88.

Grossman was inducted into the AF Fleet Hall of Fame in 2009.