Jerome "Jerry" Geckle was a former president of PHH Arval (then Peterson, Howell & Heather, Inc.) and chairman of the board of PHH Corporation from 1980-1989. 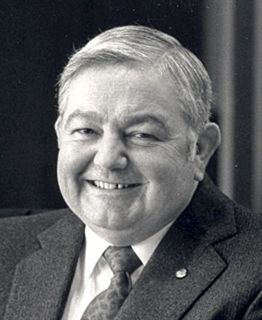 In his 35 years at PHH, Geckle brought the first IBM computer to Baltimore in 1955 and secured PHH at the forefront of utilizing technology for service to PHH customers - a legacy that continues today.

A native of Baltimore, Geckle joined Peterson, Howell & Heather to direct the development of the first data processing system for the company - and the fleet industry. He rose steadily through the management ranks, was named president of PHH in 1974, and became chief executive officer of PHH Corporation in 1979. He retired in 1989.

Geckle was frequently recognized and awarded for the advancements and professionalism he brought to the fleet industry. He also served on the Boards of Directors of several major businesses, including Constellation Energy Group, AllFirst Financial, Inc., and the Greater Baltimore Committee.

Geckle and his wife, Mary, were known in the region for their philanthropy. Their generosity led to the founding of Villa Julie College (now Stevenson University), where Geckle was chairman of the board for 2½ years, and where an Information Technology professorship is named in his honor. They were significant contributors to Mercy Hospital, Mt. Washington Pediatric Hospital, Our Lady of Grace Church, Loyola High School, Maryvale Preparatory School, Notre Dame Preparatory School, the College of Notre Dame, The United Way of Central Maryland, and many other institutions.

Geckle was also a former U.S. Marine and served four years during the Korean War.