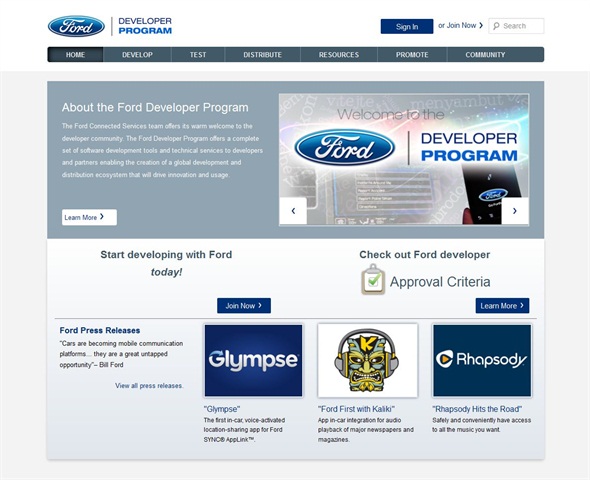 LAS VEGAS – Ford has launched its new Ford Developer Program, which will allow third-party developers to create apps designed for use in the automaker’s vehicles. The company announced its new API (application programming interface) and program at the 2013 International Consumer Electronics Show in Las Vegas.

Ford said it had been beta testing its SDK (software development kit), documentation, and technical support with a group of developers but that now the SDK is mature enough to allow developers everywhere build apps with it. The developer program involves the use of the SYNC system and Ford’s AppLink API.

The AppLink API provides new features to developers, such as allowing two-way communication between mobile apps and the vehicle. One example of the use of these features would allow apps to accept voice commands from the driver.

Although Ford is allowing any developer to join the network to build an app, the automaker plans to review each app to make sure it works and is appropriate for in-vehicle use. Each app must contain Ford’s AppLink code. After approval, Ford said it will then work with the developer to provide a distribution license. After receiving the license, the app can be submitted to an app marketplace.

In terms of technical support, Ford said developers will have direct access to Ford engineers and use of an online forum where they can communicate with other developers.