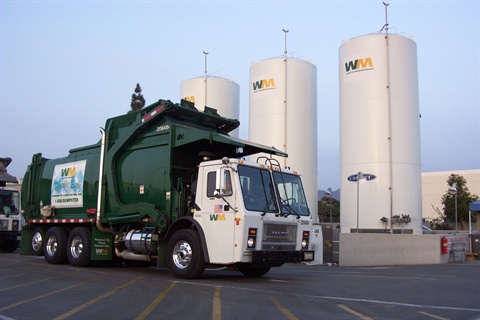 CARSON, CA - Waste Management added a 1,000 natural gas truck to its fleet, the company stated in a news release. The company celebrated delivery of its 1,000 natural gas vehicle at its property in Carson, Calif. with Long Beach Mayor Bob Foster starting up the new recycling truck.

Waste Management said that the trucks it runs out of its Carson service yard, and a third of its California fleet, are fueled by liquefied natural gas (LNG) derived from the decomposition of organic waste in its Altamont Landfill in Livermore, Calif. The company said it has been generating up to 13,000 gallons of LNG per day since November, 2009. By operating 1,000 natural-gas-fueled refuse trucks in its fleet, the company said it will displace eight million gallons of petroleum and eliminate 45,100 metric tons of greenhouse gas emissions.

Waste Management stated it has CNG and LNG fueling stations at 17 of its facilities throughout North America with more under development. Duane Woods, senior vice president at Waste Management, added that the company hopes to develop a new landfill-gas-to-LNG facility at its landfill in Simi Valley, Calif.