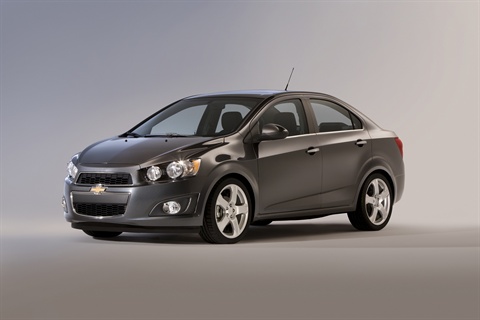 DETROIT - Chevrolet has announced that the all-new 2012 Sonic will start at a retail price of $14,495. The vehicle has a standard 1.8L Ecotec engine and five-speed manual transmission.

According to Chevrolet, the Sonic is the only sub-compact car built in the U.S. Available in two body styles: the four-door sedan and the five-door hatchback, the Sonic has 15-inch alloy wheels, traction control, anti-lock brakes and standard convenience features, including air conditioning. The car also holds 10 airbags.

When upgraded to the 1.4L turbo engine, the car is estimated to push 40 mpg on the highway.

“Sonic is truly a safer small car with three more airbags than the nearest competitor,” says Vice President of Chevrolet Marketing Rick Scheidt, in a prepared statement. “It also offers the safety, security and convenience of OnStar with Turn-by-Turn Navigation on all models.”

The Sonic has 14 cubic feet of trunk space, runs at 138 horsepower on the standard engine, and “hill hold” also comes standard.

Production of this subcompact vehicle is set for the fall in Michigan, and is estimated to help restore about 1,000 jobs in the Detroit area, according to Chevrolet.