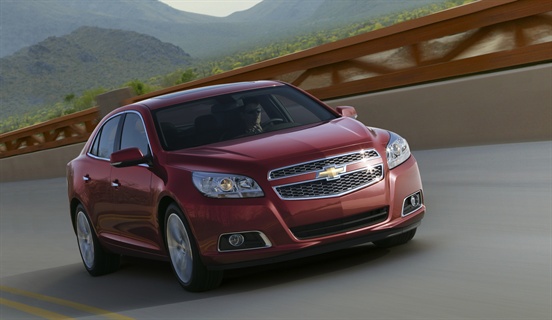 DETROIT and SHANGHAI - Chevrolet debuted its 2013 Malibu in China and the U.S. in a webcast on Tuesday, April 18 and live at the Shanghai Auto Show. The Malibu is Chevrolet’s first global mid-size sedan, which GM plans to sell in nearly 100 countries.

The new Malibu comes in three trim levels, LS, LT, and LTZ. The vehicle will come in 10 exterior colors and four interior color combination choices in North America, depending on the model. Malibu production in the United States begins in early 2012. It will be built in multiple locations around the globe, including the Fairfax, Kan. and Detroit-Hamtramck assembly plants in the United States. Pricing will be announced later this year.

So far, GM has not yet released any mpg numbers for this vehicle. We will provide an update on fuel economy figures when GM releases them.

“The current Malibu has left an award-winning impression and changed the way people think about Chevrolet. It redefined what an American midsize car could be,” said Rick Scheidt, vice president, Chevrolet Marketing. “This all-new Malibu delivers on the intangibles of today’s Malibu but gives customers even more: more style, fuel efficiency, content and features, craftsmanship, and dynamic capabilities rivaling high-end sedans.”

The 2013 Malibu models will feature a global lineup of powerful four-cylinder engines. In the North American market, the Malibu will offer the Ecotec 2.5L dual overhead cam four-cylinder engine with direct injection. New features include enhanced authority continuously variable valve timing, variable-displacement oil pump and electronic thermostat that save fuel while delivering V-6-like performance, GM stated. The company estimates the engine will be SAE-certified at more than 190 horsepower (141 kW) and 180 lb.-ft. of torque (245 Nm).

The 2.5L engine is mated to a Hydra-Matic 6T40 six-speed automatic. The new transmission offers features designed to enhance powertrain efficiency, such as changes to clutch controls and hardware that improves shift response and time. These changes enabled engineers to specify higher gearing to improve cruising efficiency while maintaining acceleration performance and driveability, according to GM. 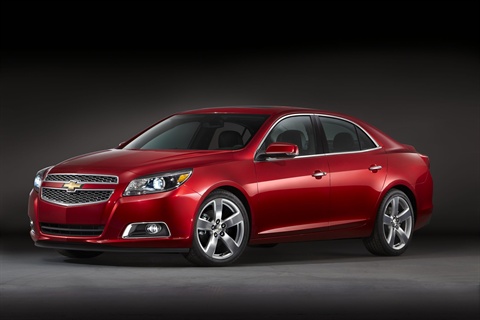 For the new version of the Malibu, GM gave its new model wider stance and an integrated rear spoiler. The new Malibu has a 4.5-inch (114 mm) shorter wheelbase and 62-inch (1,574 mm) front and rear tracks that are more than 2 inches (51 mm) wider than the model it replaces.

GM anticipates the new Malibu exterior will be SAE-certified as one of the most aerodynamically efficient cars in the segment, with a coefficient of drag (Cd) rating near Chevrolet Volt’s Cd of .280. The automaker said the Malibu’s new shape and design allowed engineers to remove 60 counts of wind drag compared with the model it replaces.

The new Malibu also has electronically controlled and integrated active aero shutters on select models in North American markets. The active shutter system automatically closes airflow through the lower intake opening when the vehicle needs the least amount of air intake. When the shutters are closed, the vehicle’s aerodynamics redirect airflow around the front of the vehicle and down its sides. Shutter open and close settings depend on engine coolant and vehicle speed. For example, the shutters open when the car is traveling up a hill, pulling a trailer, or in hot city driving; the shutters close at highway speeds when less engine cooling is required. 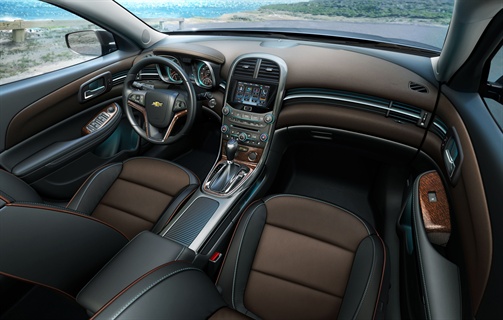 One of the more interesting storage features in the vehicle is a six-inch-deep space behind the radio face, which articulates up and down. For infotainment, the Malibu will feature Chevrolet’s new MyLink system at launch. The radio face offers a 7-inch touchscreen display for controlling a range of features. 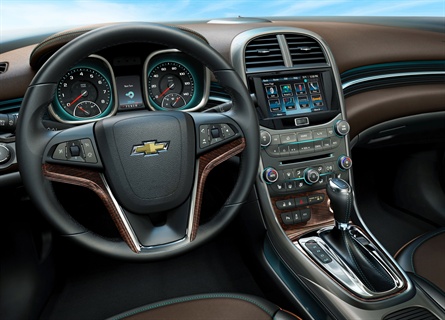 The Malibu will also offer these standard and available safety features: 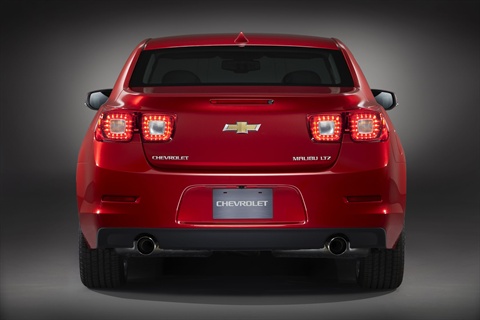 GM referred to the European-inspired handling for the new Malibu, and listed a number of features designed to enhance the Malibu’s ride characteristics.

Read more about Chevrolet 2013-MY Malibu