DEARBORN, MI - Ford Motor Co. said it will be showcasing a development version of its zero-emission Transit Connect Electric at the 2011 Geneva Motor Show.

The Geneva Motor Show will be held March 3-13 at Geneva Palexpo in Geneva, Switzerland. 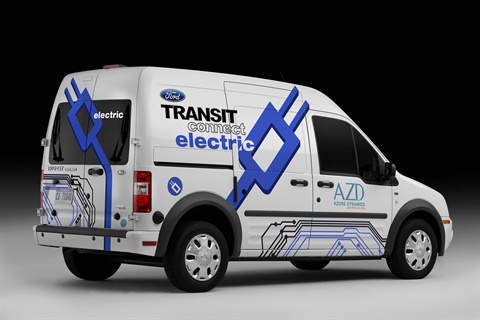 Based on a Transit Connect Kombi, the show car is one of several electric Ford vehicles currently on test in the U.K. The vehicle features the same battery electric powertrain as the Transit Connect Electric Van, which is set to go on sale in Europe later this year.

"By providing a variety of electrified vehicles, we are making it easier for our customers to embrace this fuel-saving technology," said Bill Ford, executive chairman of Ford Motor Co.

With 28kWh of power to call on, Transit Connect Electric has a top speed of 75mph (120km/h) and a range of up to 130km/80 miles. Its lithium-ion battery pack is charged via a standard power outlet and an onboard converter then charges the battery pack. It takes up to 10 hours to fully charge the batteries using standard European 220/240-volt outlets.

The Transit Connect Electric Van goes on sale in European markets later this year following its successful launch in North America in December 2010.