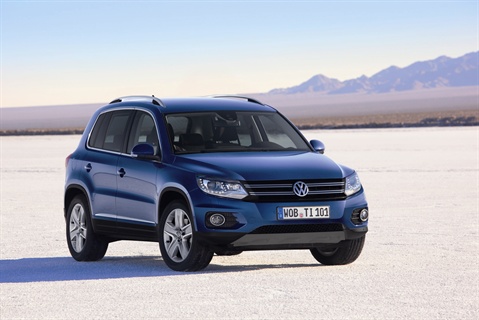 HERNDON, VA – Volkswagen of America announced details about its 2012 Tiguan, which the company anticipates will go on sale fall of this year. The Tiguan will be available in three models, S, SE, and SEL, from the base model to the luxury model, respectively.

The Tiguan comes with the 2.0L TSI, which the company said will deliver 29 mpg highway (though EPA figures are not yet available), up from last year’s 25 mpg.

All 2012 Tiguan models will feature Bluetooth connectivity as standard, aux-in, power-adjustable heated side view mirrors, and six airbags. The 2012 Tiguan comes standard with an eight-speaker radio system, and Volkswagen’s touch-screen Premium VIII radio will be available on the SE trim level. Also available are two color touch-screen navigation systems, the RNS 315 or the RNS 510 system with a rear-view camera.

Volkswagen said it will announce pricing later in the year.

Read more about Volkswagen 2012-MY