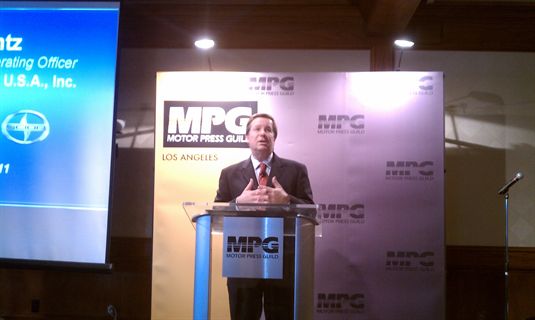 He said Toyota plans to introduce the battery-electric RAV4 EV (the automaker is collaborating with Tesla Motors on this project) and mentioned the Prius Plug-In Hybrid as another battery electric vehicle in the company’s lineup. With relation to EVs, Lentz said Toyota is also working on solid state (metal-less) battery technology. Toyota’s Lentz also said the company will develop a zero-emissions fuel-cell-powered (which uses hydrogen) vehicle by 2015.

Lentz spoke to journalists at a meeting of the Motor Press Guild in Los Angeles about the topics mentioned above. He said one driver of this investment by Toyota is the CAFE 34.1 mpg requirement that will go into effect for the 2016 model year.

When it comes to other fueling technologies, Lentz said Toyota is not planning any diesel-powered vehicles and is studying compressed natural gas (CNG) technology again in the context of the Camry NGV. Lentz said Toyota sees CNG as a “transitional” fuel type with a 30-year lifespan (2020-2050). He added that he believes that automakers will use CNG in fuel-cell stacks.

Other questions fielded by Lentz covered soft Toyota Tundra sales and the potential limitation of access to the rare earth materials used in hybrid and electric vehicles.

Lentz said with regard to Tundra sales, buyers traded in their Tundras for Tacomas during the period of high gas prices in 2008 and cited the subsequent recession as a reason for fewer purchases. Lentz said the company still plans to focus on the Tundra, but plans to manufacture the Tundra in the same plant as the Tacoma.