ARMONK, NY - Based on a new IBM survey of motorist attitudes and a recent study of auto industry executives, IBM researchers have concluded that automakers still need to address driver expectations about electric vehicle performance, recharging and convenience. What's more, the researchers recommend that automakers initially focus on EV sales to both consumers and commercial fleets, building scale and creating economic efficiencies in production.

Taken together, the two studies uncover significant differences between the polled automobile industry executives and motorists on the factors motivating the purchase of electric vehicles. For example, auto execs place greater emphasis than consumers on government incentives and oil prices. The executives were also skeptical of motorists' willingness to pay a premium for green vehicles. 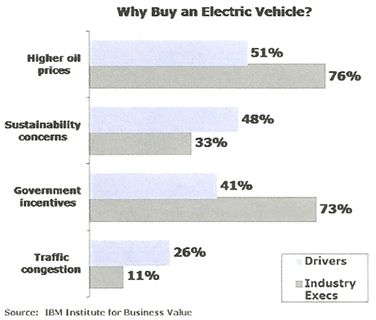 The IBM study asked drivers what would motivate them to switch from a vehicle that currently runs on gasoline, diesel or hybrid to an electric-only vehicle. The same question was posed to auto industry executives, who were asked to rate the importance they believe drivers place on each criterion. The percentage of drivers and executives who selected each criterion is reflected in the above chart.

The conclusions from IBM's Institute for Business Value (IBV) are derived from a new survey of 1,716 U.S. drivers and interviews with 123 auto industry executives. The study indicates that, even in these early days, there is a potentially large market for EVs.

Nineteen percent of drivers surveyed said that they were either "very likely" or "likely" to consider purchasing an electric-only vehicle when shopping for a new car. This is notable, given that 42 percent of drivers know only "a little" about EVs or have "only heard of them," suggesting that automakers could increase the pool of potential buyers with sustained educational campaigns, IBM researchers said.

To drive the price of electric vehicles into this more affordable zone, the IBM-IBV research indicates that automakers should initially focus on sales to both consumers and commercial fleets, building scale and creating economic efficiencies in production. Automakers may also need to develop new business models for electric vehicles to overcome the higher initial price, researchers said.

Nevertheless, the price of the home charging installation could pose an obstacle to EV adoption, researchers concluded. Only 13 percent of drivers said they would consider spending more than $1,000 to retrofit their residence to support recharging of an electric vehicle. According to industry estimates, retrofitting to a 240-volt outlet accessible to vehicles averages between $1,000 and $2,000.

In addition, two-thirds of drivers expect a price discount on their electricity for charging at home overnight. This expectation could place increasing focus on utilities for time-based pricing to encourage home charging, or more public charging will be required if an electricity discount is not available.

Home charging is considered important to the success of EVs. Of the drivers surveyed, 83 percent said they park their primary vehicle in the driveway or garage of their private residence, as opposed to in a parking lot, on the street, in a shared garage or some other location.

"Even under optimal circumstances, fully recharging an electric-only vehicle takes hours," said Kal Gyimesi, IBV automotive lead and co-author of the IBM-IBV study. "So, it is crucially important that we build an infrastructure that can charge vehicles where their owners park them for extended periods of time -- whether that is at home or at work, school or the store."

A total of 62 percent of drivers surveyed said they most often parked in a mall or store parking lot when not at home or work. That was substantially higher than any other location; "on the street" was number two at 17 percent.

"When deciding where to put charging stations, retail hubs like malls and shopping centers are good locations," Gyimesi said. "It's easy to envision charging stations in these commercial locations coupled with an advertising and promotion-based business model for local stores -- which will help make the economics more feasible."

Consumers were asked what would motivate them to switch from using a vehicle that currently runs on gasoline, diesel or hybrid to an electric-only vehicle. The same question was posed to automobile industry executives, who were asked to rate the importance consumers place on each choice. A chart summarizing responses follows:

Responses for the driver survey were similar across urban, suburban and rural areas  -- with some notable exceptions. For example, rural respondents were the most likely (59 percent) to say they would pay nothing more for an electric-only vehicle compared with a similarly featured gas-, diesel or hybrid-powered vehicle.