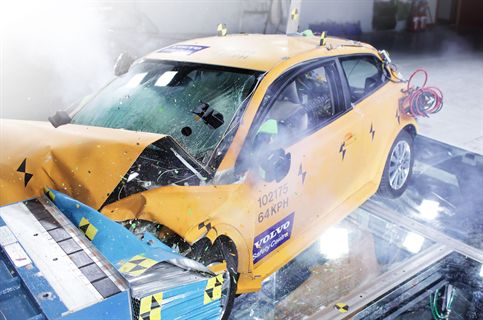 DETROIT – Volvo and Ener1 have announced that the companies have achieved a milestone in their two-year development relationship with Volvo by unveiling a crash-tested C30 Electric that uses Ener1’s EnerDel battery. The company said that this is the first time that a crash-tested electric car has been displayed in public.

The crash test was conducted in Sweden in December 2010 at Volvo Cars’ crash test laboratory using a fully charged EnerDel lithium-ion battery. The testing facility subjected the vehicle to a 40-mph offset frontal collision with a barrier and Ener1 said the test exceeded engineers’ expectations.

Ener1 developed what it calls a “split battery” for Volvo, where half of the battery is located in the central tunnel between the seats and the other half under the rear seats where the gas tank would normally be located. The battery’s energy management system is integrated into the vehicle’s electronics and control system, and in a collision the crash sensor will cut power within 50 milliseconds using the same signal that deploys the airbag.

The system also has several fuses that cut directly if it detects a ground fault, for example a damaged cable coming into contact with the body frame. The battery management system is also designed to optimize capacity and increase cell life and controls pack recharging and the cooling system to ensure safe operating temperatures. When it comes to providing diagnostic information, the system reports the state of battery health and charge. The company added that the system has multiple levels of redundancy built into its control protocols.

Volvo’s President and CEO Stefan Jacoby added that the C30 test fleet will be on the road in the U.S. in 2011.