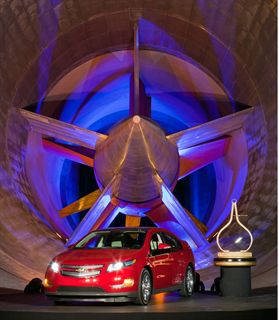 DETROIT - Motor Trend magazine has named the Chevrolet Volt the 2011 Motor Trend Car of the Year. The award was presented to Tom Stephens, GM vice chairman for Global Product Operations, at the General Motors wind tunnel in Warren, Mich.

As the world's first electric vehicle with extended range capability, the Chevrolet Volt has a total driving range of about 350 miles. For the first 25-50 miles, the Volt drives gas- and tailpipe-emissions-free using electricity stored in its 16-kWh lithium-ion battery. When the Volt's battery runs low, a gas-powered engine/generator seamlessly operates to extend the driving range more than 300 miles on a full tank, according to GM.

With a drag coefficient of .28, the Volt is also the most aerodynamic sedan in Chevrolet's history. Lowering the drag coefficient increases the vehicle's efficiency, as less energy is used to overcome air pressure. As an example, aerodynamics contributes up to eight miles of electric range, and 40 miles of extended range.

General Motors last received the Motor Trend Car of the Year award in 2008, for the Cadillac CTS.