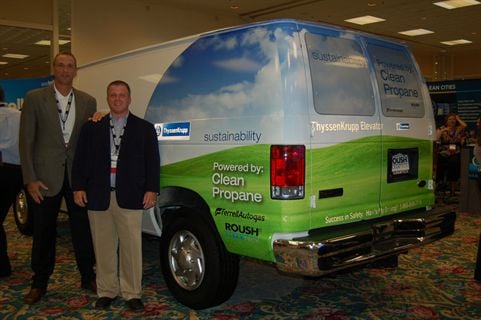 SAN DIEGO - ThyssenKrupp Elevator is adding propane-powered vehicles to its fleet as part of the company's overall initiative to "green" its fleet.

On Oct. 18 at the 2010 Green Fleet Conference in San Diego, ROUSH Vice President of Sales & Marketing Todd Mouw unveiled the first of ThyssenKrupp Elevator's new propane-powered cargo van fleet to conference attendees on the exhibit hall floor. More than 50 fleet professionals gathered for the unveiling as Mouw made the surprise announcement.

According to Tom Armstrong, director of fleet for ThyssenKrupp Elevator, the company has been working with ROUSH for approximately 12 months. The initial three vans for Phoenix could quickly turn into 15 or 20 vans in the Phoenix market.

"Our propane autogas partners, ROUSH and Ferrellgas, were instrumental in making this successful in the Phoenix market. The same process should also be instrumental in other cities," said Armstrong. ThyssenKrupp Elevator has been identifying other markets in the county and currently has six to eight major cities on its short list, he said. 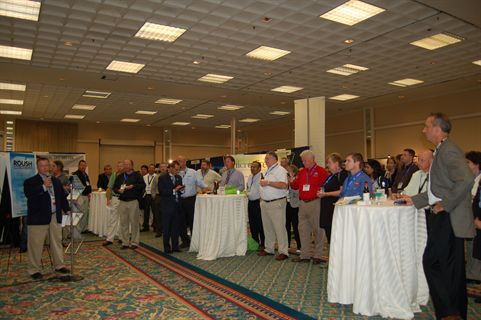 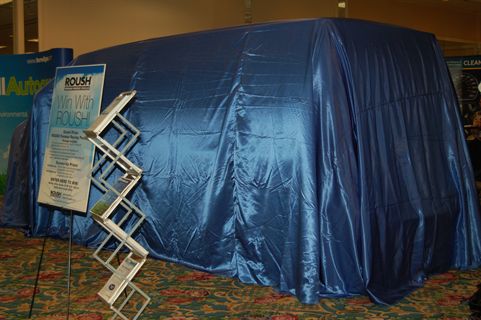 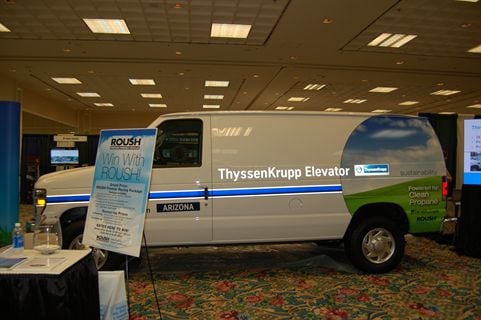 Propane has approximately 60-percent less CO emissions, 20-percent less NOx emissions, 24-percent less greenhouse gas emissions, and the majority of propane production is within the U.S. The addition of propane-powered vehicles will also help ThyssenKrupp Elevator reach its goal to reduce fuel consumption by 20 percent by 2012.

With 3,300 total vehicles, ThyssenKrupp Elevator is ranked No. 118 on Automotive Fleet's 2010 Top 300 Commercial Fleets listing. Ford Transit Connects are also among the vehicles contributing to the "greening" of the company fleet.