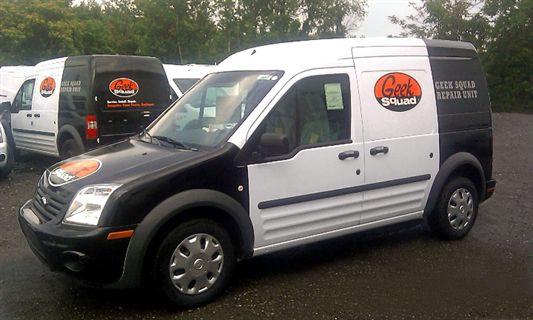 According to Jason Pucely, senior manager, Best Buy Fleet Operations, the selection of the Ford Transit Connect was dictated in many ways by the company's new operating model, which drives to deliver superior client service through more efficient scheduling, inventory management, and transportation systems.

"We're streamlining all of our activities," he explained. "We've developed a more effective routing system, and we're more efficient with the tools and parts we carry when we do our work. That has enabled us to put the same technician doing the same work in a smaller, lighter vehicle."

Pucely said the Ford Transit Connect offers the functionality Geek Squad technicians require to get their work done, while not compromising on some of the space requirements that a full-size cargo van offers.

In addition to the cost and environmental benefits, Pucely foresees other advantages.

"Our technicians typically carry diagnostic equipment, motors and other electronic parts, so having the side access panels will make it easier for them to get to the equipment they need," he said.

The unique appearance of the Ford Transit Connect also promises to be an added bonus, said Pucely.

"A distinctive vehicle has been part of the history of Geek Squad in the marketplace," he said. "We value our fleet as a tool to enhance our brand messaging, and the Transit Connect will certainly help in that effort."

All of the vehicles will carry the familiar Geek Squad branding — black-and-white with the orange-and-black Geek Squad logo.

"Home theater equipment is large, and it requires the space of a full-size van," said Pucely. "But our technicians can do the same amount of work using a vehicle with a smaller engine, which is less expensive to run and burns less fuel."